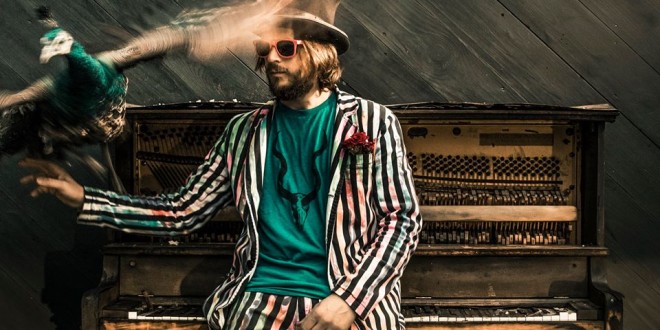 Directed by Jonathan Leder and starring pin-up model Amy Hood, Marco Benevento has premiered the video for the first single “Dropkick” off his new studio album, The Story of Fred Short, out April 1 on Royal Potato Family. The collection is some of Marco’s finest and most adventurous work—a maestro making “bold indie rock” says Brooklyn Vegan. It’s the follow-up to 2014’s Swift, which found Marco singing for the first time and honing his psych rock and late night dance party sensibilities. The Story Of Fred Short is a continuation of this exploration, and Marco cites everything from LCD Soundsystem, Harry Nilsson, Manu Chau and Gorillaz as inspiration.

Divided into two sides, The Story Of Fred Short oozes with Marco’s relentless creative spirit in songwriting, performance and production. Side A is stuffed with mesmerizing dance rock gold. Marco doubles down on the groove using a rare Casio drum machine that’s become a recurring muse in addition to a live drummer. The B Side tells the real and imagined story of Fred Short in seven chapters of wild, heavy rock ‘n’ roll. Fred Short was a Native American man known for throwing musical bacchanals on the property Marco now lives in Woodstock, NY.

Marco Benevento recorded and self-produced the album at his Woodstock studio (also named Fred Short). He’s joined by his core band of Dave Dreiwitz on bass (Ween) and Andy Borger on drums (Tom Waits, Norah Jones). This is only Marco’s second time singing on one of his albums, and it’s the first time he’s added guitars on his original songs (recorded by friend and former bandmate Brad Barr of The Barr Brothers/The Slip).