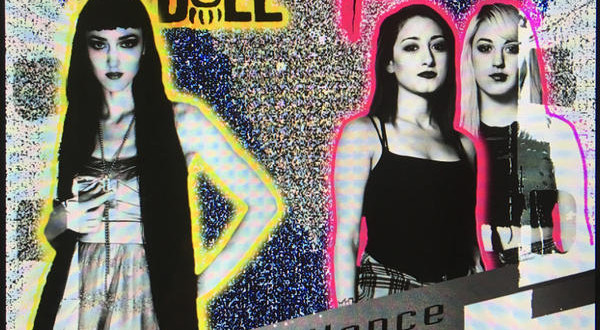 Theatrical-rock duo ONE-EYED DOLL announced earlier this year that they would be embarking on a co-headlining Spring tour with fellow female-fronted rockers EYES SET TO KILL.  The “Visions Tour” will kick off on March 16, 2016, with support from OPEN YOUR EYES.  To celebrate the upcoming trek, ONE-EYED DOLL and EYES SET TO KILL have teamed up to release a cover of Depeche Mode’s hit, “Enjoy The Silence.”  The track will be available on May 1, 2016, but “Visions Tour” ticket holders will be sent an early, pre-release copy of the song. Tickets must be purchased here to be eligible for the pre-release.

A short video promoting the tour was just released, and also features a snippet of the “Enjoy The Silence” cover.  The video can be seen here:

One-Eyed Doll offered this insight on the collaboration, “One-Eyed Doll and Eyes Set To Kill have been long time fans of each other.  So when we put this tour together, the first thing we wanted to do was get into the studio and collaborate on a song.  We’re both huge fans of Depeche Mode and ‘Enjoy The Silence’ is such an amazing and classic song, it was a natural choice.”

A true DIY success story, One-Eyed Doll has organically gained somewhat of a cult fan-base.  With their captivating and interactive live performances, consistent touring, and personal connection with fans, it’s no wonder that the duo – consisting of only vocalist and guitarist Kimberly Freeman and drummer Jason “Junior” Sewell – have been buzzing since 2006. Adored by fans and press alike, One-Eyed Doll has been direct support for Orgy, Mushroomhead, Wayne Static of Static-X, Otep, and countless others. Freeman was also deemed one of Guitar Player Magazine’s “Top 20 Most Extraordinary Female Guitar Players” and one of Revolver Magazine’s “Top 5 Most Influential Women In Music.”  Their new record ‘Witches’ – a concept album based on historical research of the Salem Witch Hysteria – was released on Standby Records earlier this year.  The full album can be heard here.