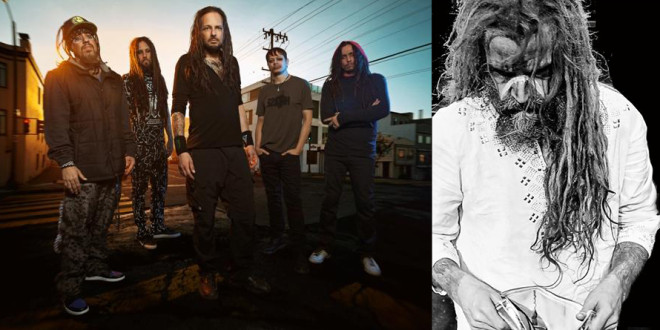 Metal music legends KORN and ROB ZOMBIE unveiled details behind their co-headlining summer 2016 tour.  Produced by Live Nation, the two influential bands will launch this summer’s most anticipated metal music tour on July 19, 2016 at Fiddler’s Green Amphitheatre in Englewood, CO and will visit 26 North American cities including Austin, Los Angeles, San Francisco, Toronto, Seattle, Las Vegas and more.  A complete list of dates, venues and cities is below.  In This Moment will join the tour as special guests.

* In addition to regular Rob Zombie & Korn single ticket options, fans in these markets will have access to a special 3-show TICKET TO ROCK which will include a lawn ticket to each of the following three shows in each participating market:  Korn & Rob Zombie; Slipknot with Marilyn Manson; Disturbed & Breaking Benjamin.  The 3-show TICKET TO ROCK is on sale now.  Go here for more information.

Korn built an immortal bond in 1993 the first time Jonathan Davis, James “Munky” Shaffer, Reginald “Fieldy” Arvizu, and Brian “Head” Welch decided to make music as a unit. They shed blood, sweat, and tears in the studio and on stage, fashioning an undeniable and unique sound that would permanently alter the course of rock music. After six seminal releases, two Grammy Awards, countless sold out shows, and selling 35 million albums worldwide, Head left the group in 2004 to face the demons of addiction. Korn soldiered on, adding drummer Ray Luzier in 2007 and releasing four more full-length releases. In 2012, a triumphant and tear-filled reunion happened on stage as the group headlined the Carolina Rebellion Festival with Head reprising his legendary part on “Blind”. The initial bond came back into focus, and it was time for their next studio album, The Paradigm Shift, which seamlessly melds the group’s ever-present spirit of innovation with their signature metallic catharsis, paving the way for the future yet again. In 2014, Korn started their 20th anniversary celebrations, playing their critically acclaimed self-titled debut album in its entirety. The shows were so well received, the group continued the festivities into 2015, performing the record on tour to fans around the world. At present, Korn is back in the studio hard at work on their twelfth album set for release in 2016.

Previous ARKADE RELEASES Project 46 & BYNON “Castles”
Next Show Review: From Ashes to New at Webster Hall in NYC on 02/26/2016