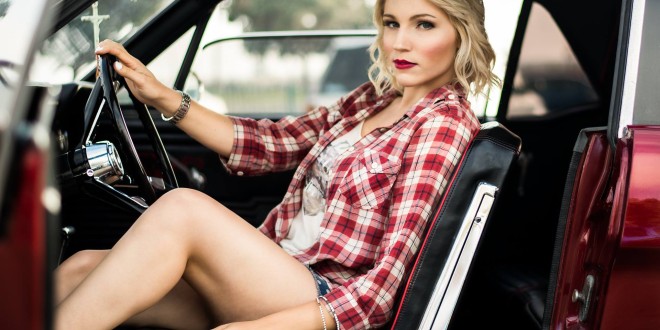 Sarah D is running with the music leaders of today. She’s developed friendships and has been taken under the wing of mentors who are responsible of creating today’s stars like Justin Bieber and Britney Spears. She’s written over 250 songs and has been in high demand since the release of her new song “Lighter Ignite!” In this exclusive interview we get to learn about her musical influences, songwriting inspiration, what’s next in her career and where we can find her in the social world!

Music has been a huge part of your life so far, how was it introduced to you as a child and at what point did you decide that you wanted to pursue this as a career?

I’ve always had a passion for music despite being a really shy child. My parents are European so I grew up listening to a lot of Euro Pop music and would dance and sing around the house. My mom used to play the guitar and organs in church therefore I was semi surrounded by music.

Obviously having written so many songs, inspiration is not in short supply – how do you find new creative ideas and topics?

It’s always important to exercise the brain like any other muscle in the body. As a writer you need to train it as a muscle to write on demand rather than waiting from inspiration to spark. Though it’s a bit challenging some days, it’s not impossible. I do take a lot of life lessons and conversations into my songs cause that is something I can personally relate to. The goal for every song I write is for it to resonate with someone.

Who are your musical influences?

I have so many and I think they change depending on the mood I’m in. I’m a huge idol of Sia, Kelly Clarkson, Jessie J, Bruno Mars, Katy Perry and Justin Timberlake. I think people behind the scenes don’t get appreciated enough but they really inspire me too. Writers like Lindy Robbins, Dianne Warren, Savan Kotecha, Ryan Tedder, Julia Michaels and Bonnie Mckee inspire me to stay versatile as a writer.

If you could describe your sound as being the daughter of two famous artists, who would they be and why?

The sound of the songs I have online right now would probably be the music baby of Kelly Clarkson and Sia. They are melodic, a little more edgy and empowering. I’m always trying to expand on my versatility as a writer.

I know that you have a YouTube channel that you post covers on. I loved your “Titanium” cover! How long have you been making covers?

Thank you! I love that song. I started making YouTube videos in about 2012. Back in music college, I had to sing a song as part of my assessment and didn’t think I did too well, so afterwards I took my guitarist at the time into a hallway to work through it and filmed it for fun. We thought we had a decent take so our friend randomly posted it on Youtube for us and it managed to gain a lot of attention. From there, I liked the concept of the hallway reverb so I would take a bunch of my musician friends down there to film and continued to make videos! 2016 is going to bring about more online videos. It’s the way music is going.

What was the first song you ever covered?

Ahhhh I don’t think I have it on there anymore but I’m pretty sure it was ‘Misery’ by Maroon 5. They’re such a great band. That first video was a giant experiment for me to get more comfortable in front of the camera. THAT’S why I took it down 😛

When you’re not in the studio recording or writing, what do you find yourself doing the most?

If I could make music all day I would however, without experiences, there would be no songs. I love adventure, anything from hiking to sports and the beach. I’m lucky to have a great partner in crime to balance life and music.

My top three tips are:

Write what you know, people want to hear songs that relate to their lives and feelings. If you stay true to your feelings, there are bound to be others who can relate too.

Simplicity is key. Lyrics should be clean and conversational, like talking with a friend. Melody should be the strongest focus so the lyrics should be easy to understand and not overly complex.

Have fun! It should always be fun. If it’s not, you’re either overthinking or doing something wrong. Shake it off, go for a walk and come back refreshed.

What’s the best piece of advice an industry insider has given you?

The best piece of advice I’ve been given over and over again is to surround yourself with people better than you, a strong creative and supportive team. This not only should be inspiring but motivate you to grow as a writer and artist. These people should believe in you and will do whatever they can to help you achieve it.

If you could tour with any artist who would it be and why?

That’s tough. I’d love to tour with Justin Timberlake or Bruno Mars. They are both incredible artists who know the business very well, are truly dedicated to their craft, and would probably be a ton of fun to clown around with off stage.

If you were trapped on an island and could only bring 3 things with you, what would they be?

There’s so many things I would take but I’d probably bring a camera, a journal and friend to capture the experience with. 😉

What are your musical plans for 2016?

I’ll be releasing a single very soon following a few more singles as well as continue to provide content for my YouTube channel. So stay tuned!

Where can we find your music?

Stephen Vicino is the founder of MusicExistence.com. He created this site to give talented musicians a voice and a way to be discovered.
@@svicino
Previous Aussie Boys, Them Swoops Debut Sun-Drenched New Track
Next Gallery: Butcher Babies at the House of Blues in Chicago, IL 03/01/16