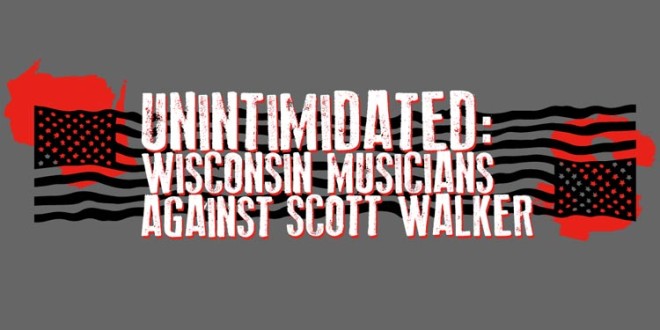 A group of local punk, hardcore, metal and indie musicians have teamed up in protest against governor Scott Walker. Led by DJ Hostettler (of IfIHadAHiFi) and Anthony Webber (of Heavy Hand), the bands have gathered together to release UNINTIMIDATED: Wisconsin Musicians against Scott Walker – a compilation CD/DVD that will raise funds for issues that Governor Walker reportedly detests. The compilation will also include an old-school cut-and-paste zine, and all proceeds will go to soup kitchens and Planned Parenthood.

DJ said about the compilation: “We’ve worked on this project for about a year now, hatching our scheme in February 2015 and moving from gauging interest in the bands, to securing a studio, to convincing an absolute murderer’s row of musicians, engineers, cameramen, editors, and gruntworkers to donate
their time to a project that, in today’s political environment in Wisconsin, runs the rest of being little more than a cathartic scream into the wilderness. But hopefully it’ll be more than that.

If this collection of songs can raise money for some solid causes that help those whom Scott Walker refuses to help, then this is a success. If this collection of songs provides a soundtrack for a political revolution in Wisconsin that leads to motivated progressives taking back our state from the tyranny of the rich and power-mad, then holy shit, that’s amazing. But at the very least, we will have provided a document of artistic work that will hopefully stand for generations and show Wisconsin, the country, and the world, that no, not everyone in Wisconsin was satisfied to sit and let Scott Walker and his corporate overlords ruin our state.

There were at least 16 bands’ worth of progressive punk rockers that said, “we are ANGRY and we want the world to know it.” If all this project achieves is a mighty, violent scream of outrage, well, at least we managed that, and hopefully someone heard us.”

Learn more about the project here.

About UNINTIMIDATED:
UNINTIMIDATED: Wisconsin Musicians Against Scott Walker is a group of Wisconsin bands who convened in late August, 2015 to record a rapid-fire series of protest songs condemning Wisconsin governor Scott Walker. Each band had a two-hour block of time to record their song at Howl Street Studios in Milwaukee. The end results will take form as online videos, music, and a physical CD/DVD/zine release in Spring 2016. Proceeds from the sale of this product will be donated to Planned Parenthood of Wisconsin and Milwaukee soup kitchens in the interest of assisting the lower-income citizens most threatened by Scott Walker’s regressive policies. 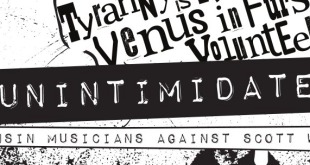