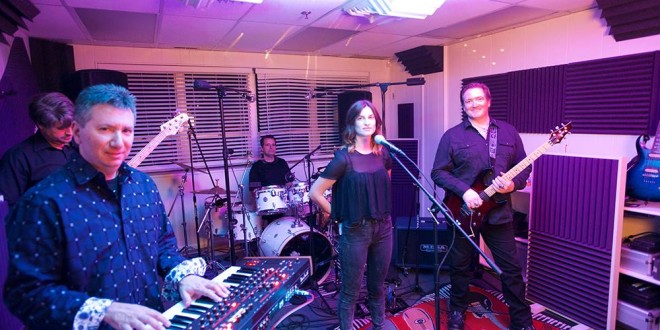 DreamEternalBliss music takes ’80s new wave influences and wraps them up in a fresh, modern rock style. You’ll hear and feel some classic Euro-pop influences, but DreamEternalBliss doesn’t emulate those bands. This is fresh music with a nod to the past. There are big keyboards and sultry vocals, plus outstanding guitar work that was rarely heard in the synth-heavy classic bands. It’s not every day that a couple of respected progressive rock musicians decide to abandon their love of the long-format concept record and pursue something more commercially appealing, but that’s precisely what happened when Days Before Tomorrow founder, Scott Kahn, got together with DBT bandmate Derek Davodowich to plot the next chapter of their musical journey. With the addition of vocalist Carrie Edwards, together, the band became DEB, a name that ideally suite’s the dreamy, synth-pop element of the band’s sound.

What’s to be had here is a great combo of dance music and AOR prog-rock music weaved together like never before. You don’t find these combos everyday anymore, especially mixing two such diverse approaches with such a one sided result, but they pull it off well. They easily remind of everyone from Timbuck Three to Roxette. But there is a hard underlying edge that won’t quit.

The EP kicks off with “This time” and right away you get a radio friendly feeling that is so familiar of both the 80’s and 90s at the same time. One of the first things that grabs me is drummer Byron Barbieri, and how he holds the beats down but also flies around like an octopus. I find the whole track driven by this, but you also get a good taste of what singer Carrie Edwards has to offer. She is a force to instantly reckon with. A very fine and well-articulated throwback. This track could benefit from double the length, it’s so good. You want to push repeat but can always listen over, so, continuing is recommended. I’m not sure if the next person will agree, but it’s always best to run through a disc once before skimming around once you have your head wrapped around it. This is no exception but does have that skim around quality as well.

To each their own because for this band, getting away from the long playing record seems to be the idea with this EP, but you still can’t help but tell they want to go longer. It must be the prog in them, combined with how 12” singles play out. But the next track “Home” is another animal. I think this is the best track on the EP and that is because it has the most eclectic sound with lots of hard driving guitars and a more evened out vocal performance. Plus it features some acoustic lines that takes it to another place without taking over. It’s a very romantic touch and beautifies the release. I wouldn’t change one thing about this. Everyone shines brightly on this outstanding slab of retro-active noise. In all of the familiarity you tend to forget there is any, as they have a sound that is all theirs, even though they didn’t invent anything on this debut outing. Instead they play from their strengths, which is their influences combined with their original prowess.

The synth-pop factor heats up on “Die And Learn,” which also combines some organic vibes and a slower pace which tends to almost grate by the time it’s over. I like some of the burst of energy but this is also mixed with some pedestrian sounding parts that leave me cold and wanting more of the previous action, but you can’t like everything. I just find this more of a forced effort than its accompanying tracks. The acoustic guitar is probably what takes me over the edge, but it’s nothing to do with the singing to be enjoyed here, to its credit. And that makes way for “Don’t Stop,” which takes things back up a notch, but doesn’t have any heavy rocking guitars like some other spots. But it’s a good effort to carry the beat on and it grooves to the max and makes you move and forget all of these points. Mission accomplished.

“Unfamiliar Faces” is probably the biggest display of pop on offer, but it’s not the best song here, that’s for sure. I do like this one and it keeps up the pace but falls a tad short in the strength department. Nevertheless it is well-written and recorded and you just can’t say anything bad about it, but to be critical it’s the most repetitive track. But it’s complemented by the churchy intro of the closing track, “Leave Me Be.’ This is easily a highlight but it’s an EP so that is a hard call, but it would have to be my favorite on the disc, and to keep things modern it almost reminds of Lady Gaga, but perhaps even more theatrical, as Carrie Edwards nails her best vocal performance.

The whole thing has a jubilant feel that is hard to come by anymore in this day and age, it’s fresh and vibrant but also contains vintage qualities that render them amongst the best of what the 80s and 90s were all about, and frankly missing in this more disposable era where nothing lasts anymore.