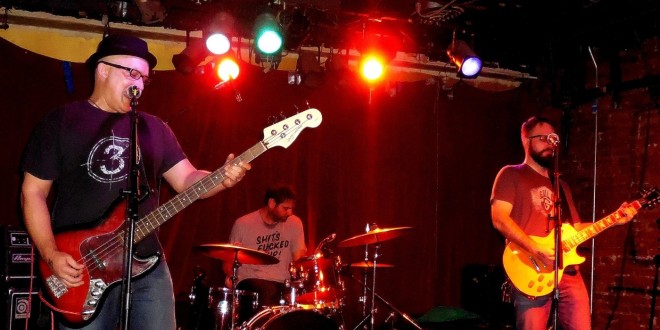 The Love Load with a new EP – “Metal Mothman”

The Love Load with a new EP – “Metal Mothman”

The Washington D.C. punk rock trio The Love Load has released a new EP, called “Metal Mothman”. The expectations are high after the success of their previous three albums – “Oh Be Joyful”, “Three on a Match” and “The Human Resourceful”. However, “Metal Mothman” easily clears the bar. The EP is inspired by the Point Pleasant (West Virginia) legend of the winged creature with red eyes that has captivated the imagination of people for more than forty years.
The first “song” of the album – Intro, is actually a monologue over a dissonant melody, telling the sad, yet scary story of the Mothman. It smoothly transfers into the punk piece “The Awakening” – it has a catchy riff and the lyrics tell an interesting story. The vocals are rough and not exactly melodic, but it really fits the music and adds to the “punkness” of the sound. The next song is “Tower of Babbling Arrows”. It’s quite similar to “The Awakening” – energetic, catchy and fun. “The Bridge”, with the creepily narrated monologue on humanity’s arrogance and the distorted guitars in the background, is definitely one of the highlights of “Metal Mothman”. This song is mostly influenced by the tragedy of the Silver Bridge in Point Pleasant that collapsed on December 15, 1967, killing 46 people. The legend blames Mothman for the incident. “The TNT Plant” is the last song on the EP and is guaranteed to get stuck in your head, urging you to listen to the full album again!

The Love Load was founded in June, 2010 by the rock veterans Ben Azzara (drums), Blaine Misner (guitar, back vocals) and Ted Watts (base, lead vocals). After playing in Pup Tent with Azzara for five years, Watts decided the time had come to record some of the songs that he had piled up through the years. Ted had a pretty amazing success as a bass (and sometimes lead) guitarist – he played in various bands like Disco Inferno, Skelp, Girl Train, The Burnt Ernies and Spoonfed. His experience helped him choose the right drummer for his project – the amazing Ben Azzara, who also had quite a few bands under his belt like The Caution Curves, D.C.I.C., The Sarah Azzara Band, Delta 72, Junction, Capital City Dusters, Candy Coated Pain Pills, as well as some cooperation with artist like Joe Lally, Chris Grier, Stella Schindler and Sean McArdle. However, the real magic happened when Azzara and Watts met Blaine Misner – the recording engineer and rock guru, who not only managed to capture and amplify the soul of Watts’ music, but also added his own powerful guitar shreds to it. Misner plays in the grindcore band Three Faces of Eve, when he’s not working with Azzara and Watts. The Love Load list their influences as David Bowie, The Kinks, Mission of Burma, Dinosaur Jr., The Who, The Stooges and Devo, although the truth is they don’t really sound similar to any of these musicians, but have an unique and personal voice.

“Metal Mothman” can be downloaded for a small price on The Love Load’s bandcamp page and will be released on Vinyl in 2016.