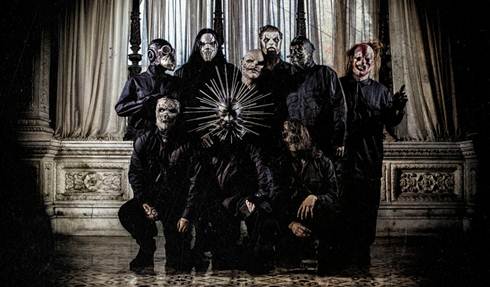 Slipknot have announced full details of their massive summer headline tour with Marilyn Manson and Of Mice & Men. The North American trek will see the GRAMMY® Award-winning group bringing their explosive live show across North America, kicking off June 9th at Salt Lake City, Utah’s USANA Amphitheatre (see tour itinerary below).  Slipknot Fan Club ticket presales will begin March 1st at 12:00 PM local time at http://ot9.slipknot1.com/, followed by Citibank presales on March 2nd, local Live Nation and radio presales on March 3rd and general onsale March 4th at 10:00 AM local time.  Slipknot’s shows are unrivaled in jaw-dropping excitement and intensity – Rolling Stone recently referred to their performance as “one of the most involving, satisfying live shows on offer”- and this summer’s stage show will push even greater limits. For ticket information and all of the latest news on Slipknot please visit http://www.slipknot1.com/.

Slipknot’s raw and poignant new single “Goodbye” is currently impacting Rock Radio outlets nationwide and following the success of the band’s Top 10 hit “Killpop.” Earlier this year Slipknot released their official music video for “Killpop” which was directed by the band’s own Shawn “Clown” Crahan and has since amassed over 23 million views streaming on Slipknot’s official YouTube channel.  “Killpop” marked the band’s second Top 10 radio hit from their acclaimed new album .5: The Gray Chapter, the other being the blockbuster first single “The Devil In I,” which proved a multi-format rock radio smash. “The Devil In I” companion video, also directed by Shawn “Clown” Crahan, has since cemented itself as one of the groups most watched music videos with 70 million individual views at Slipknot’s official YouTube channel.

Furthermore, it has been announced that Slipknot frontman Corey Taylor will be launching a new radio show on Apple Music’s Beats 1.  Titled A Series of Bleeps with Corey Taylor, the first installment is set to air to air Wednesday March 2nd at 7:00 PM PT on Beats 1, with an encore Thursday the 3rd at 9:00 AM PT.  The shows will also be available on demand within Beats 1. A Series of Bleeps with Corey Taylor the Slipknot frontman will explore a theme and plays his favorite metal, rock, rap, and more. Visit www.apple.com/music/radio for more info.

.5: The Gray Chapter, Slipknot’s fifth studio album for Roadrunner Records and first since 2008’s RIAA platinum certified chart-topper, All Hope Is Gone made a stunning chart debut upon its arrival in October of 2014, entering the SoundScan/Billboard 200 chart at #1 with sales in excess of 131,000 albums – the highest debut for a hard rock record in 2014. Furthermore, the album made an explosive chart impact around the globe, with #1 debuts in Japan, Australia, Canada, Russia, and Switzerland, alongside top 5 debuts in the United Kingdom, Germany, Ireland, Austria, New Zealand, Mexico, Denmark, and Finland.

Slipknot emerged at the tail end of the Twentieth Century and quickly established itself as the most enigmatic, provocative, and aggressive collective of the modern era. 1999’s SLIPKNOT stands as a true milestone, named by Metal Hammer as the “Best Debut of the Last 25 Years.” The album fast earned 2x RIAA platinum certification, with each of Slipknot’s following releases – including 4 video albums – all receiving additional platinum certifications in the US and around the globe. All told, the band has 11 platinum and 39 gold record certifications worldwide.

Additional Virginia Beach, VA Tour Date To Be Announced In The Coming Weeks