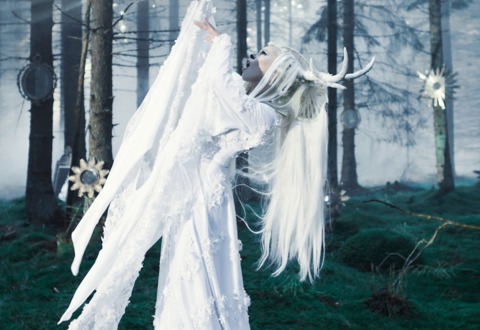 Kerli made a welcomed return to the world of music with her stunning new video for her latest single “Feral Hearts.”

The video — directed by CJ Task with creative direction by Kerli — premiered Friday on NYLON.com who described the video as “spellbinding,” signifies Kerli’s show-stopping return with this breathtaking new single, available now on all digital platforms worldwide.

“(Feral Hearts) isn’t like anything I have ever created before. It comes from deep within the core of my land and my bloodline,” the young Estonian artist explains of her new single, taken from her forthcoming album due out later this year. “It captures that idea of going back into the wild, reconnecting with nature and embracing that beauty and delicacy.” Which is exactly what Kerli did last year.

In 2015, she packed her bags, left Los Angeles (where she had resided since 2008) and returned to her birthplace of Estonia. In search of inspiration, she sought a certain solitude and mythical tranquility that could only be found amongst the lush forested landscapes of her homeland. Back amongst the wildlife and trees and beneath the Eastern European moon and stars is where she first found inspiration as a child and where “Feral Hearts” was born.

Kerli’s accompanying official video to “Feral Hearts” is as captivating as the track itself and was shot in Estonia too, showcasing the expansive landscapes, dusks and dawns and lush greenery of her native land. What Bjork has done for Iceland, Kerli hopes to do for her own country, of which she is extremely proud of it’s unique and unspoiled beauty and the inspiration it  has provided on her forthcoming full-length.

When creating her art, Kerli seemingly constructs an entire world that envelopes the very essence of her inspirations. A unique visual aesthetic compliments her music and every effort is made to bring the song to life. In the case of “Feral Hearts,” Kerli created exotic characters based on her own designs and chose to film the video in the forests of Estonia with a local production and crew, also emphasizing the importance of supporting local business in the global age we live.

“Feral Hearts” is taken from her forthcoming yet-to-be-titled full-length album and is available worldwide on iTunes and Spotify. Details on her full-length still to come.

Previous Elliphant Reveals “Spoon Me” Featuring Skrillex. Announces North American Tour
Next Bullet For My Valentine to Return to US in May in Support of New Album “Venom”