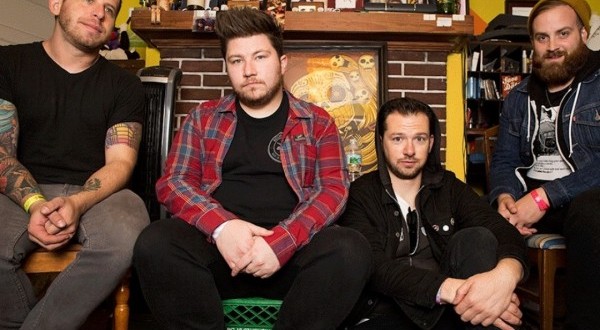 Formed in the late 1990’s, Protagonist drove the South Florida music scene by storm with their DIY approach and uncanny ability to build a following in a scene, which virtually did not exist over a decade ago. Influenced by Bouncing Souls, Bad Religion, and H20, the band adopted east coast punk sensibilities with their own spin on melodic punk. After multiple releases on Blackout! Records and Paper + Plastik, the band joined forces with Smartpunk for their latest EP release, Jean Jackets in June, produced by Pete Steinkopf of the Bouncing Souls which was released in October, 2015. The EP offered the band’s signature compilation of fast-beat, east coast punk inspired, and passionate songs including their single “Hideaway.” The songs dives into the disassociation of location, where as a musician you are caught between home and playing on the road.

This week, the band has partnered with Punktastic to unveil their Static Sessions, an acoustic/live version of the track, “Hideaway,” which can be viewed here (or directly below).

“‘Hideaway’ encompasses the idea of what it feels like to have no home to return to. It is an idea we explored previously in ‘Tunbridge’ and ‘The Stranger The Boy Became,’ from ‘States.’ As I’ve grown older, and moved throughout the United States, things on the homefront have changed. The concept of what was once home becomes more distant with each return visit. In the end, what once was your haven seems like a foreclosed hideaway.” – Peter (Protagonist)

“Hideaway” is off Jean Jackets in June – (SMARTPUNK):  get it here on iTunes
In addition, the band is gearing up for a slew of hometown shows with New Found Glory as the two South Florida masterminds travel up and down the Florida coast together this February. The tour kicks off February 25th in Pensacola where they will make their way to South Florida to perform at Culture Room, an iconic venue that has brought much success for both artists. See below for official tour dates!

MORE ABOUT PROTAGONIST:
At its core, Protagonist is more idea than it is band. In its many forms, Protagonist has existed for more than 15 years. It is both surprising and refreshing that a band which has existed for that period of time and has experienced incredible highs and potential career-ending lows is still moving forward. Now more than ever, their eyes are firmly looking into the future. The band is comprised of Peter Marullo (vocals), John Marullo (guitar), Brian Forst (guitar), and Kyle Macdougall (drums). Formed in 1999 in Boca Raton, FL, Protagonist were influenced by the mid 1990s east coast punk explosion especially artists hailing from the Philadelphia area where brothers John and Peter Marullo had lived from birth until 1996. In addition, Protagonist was driven by a simple desire to start the best possible band. Punk? Street punk? Hardcore? Something undefined? That definition never mattered. To this day, it still does not matter to Protagonist. Define them how you want. This is not just a punk band. This is Protagonist. Fast-forward to 2015 and Protagonist might be the best punk band that you’ve never heard of. On the contrary, they are perhaps a band that you believe you know their sound, history, and story. With their newest release, Jean Jackets in June, you might find yourself surprised. The signature Protagonist forbidden beat still remains, but there are indications of the places Protagonist wants to take us through this collection and more importantly, into the place where the members of Protagonist have their eyes continually set: the future.

Protagonist’s musical journey can be traced back to their first LP, Hope and Rage (Blackout) through 2009’s The Chronicle, and to their last release, States both released on Paper+Plastick. Do not call Jean Jackets in June a departure in sound. For the individuals who have followed the Marullo brothers and Protagonist, they know this is a Protagonist record, but it seems that the Marullo brothers, along with Brian Forst, and Kyle Macdougall who make up the Protagonist brain trust, have tapped into the idea of the band and have tried to personify that idea through song, demonstrated through a collection they intended to create.