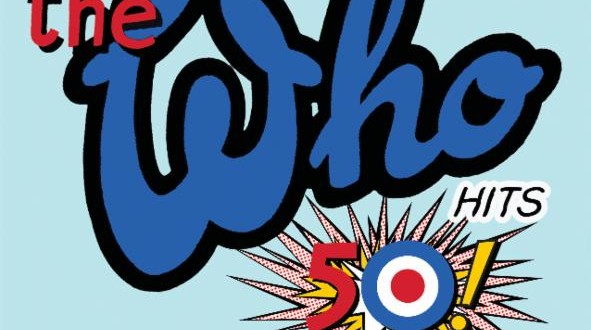 As they prepare to re-launch the North American leg of “THE WHO HITS 50! TOUR” Saturday, February 27 in Detroit, THE WHO returned to the stage Saturday, February 13 at SSE Arena, Wembley for their first show since the tour was postponed in September (2015).That performance was described by The Telegraph (U.K.) as “high-voltage virtuosity…The Who were in full flight…America’s in for a treat. As these grizzled septuagenarians milked the ovation for their feats of rockin’ physicality like punch-drunk boxers, there were no hard-and-fast goodbyes” (2-14).

When THE WHO take the stage in Detroit, it will mark the beginning of a 28-date tour of rescheduled dates from THE WHO‘s 2015 trek–which was postponed to allow lead singer Roger Daltrey time to recover from his recent bout with viral meningitis–and includes stops in Toronto, New York, Boston, Chicago, and Los Angeles, before wrapping Sunday, May 29 in Las Vegas.  Tickets for the originally scheduled shows will be honored at the new dates.  For the tour openers, the band has set Tal Wilkenfeld to perform on the first 13 shows with Slydigs to accompany them on the remaining dates. In addition, 2015 Rock and Roll Hall of Fame inductees Joan Jett & The Blackhearts (who accompanied THE WHO on the first leg of this tour) will perform as special guests at the Thursday, March 3 show at Madison Square Garden in New York City.

Australian-born, LA-based Tal Wilkenfeld (www.talwilkenfeld.com) is a musical marvel; the female bassist is a dynamic young talent with a fresh vision.  Tal has made quite a name for herself as a sought-after bassist since emerging onto the music scene as a teenager. After releasing her acclaimed, instrumental jazz debut,Transformation, Tal went on to tour with Chick Corea and Jeff Beck. Her performance at Eric Clapton‘s Crossroads Festival in Chicago has generated more than 10 million+ YouTube plays to date.   She has recorded studio projects with some of today’s most respected and iconic artists in the industry such as: Prince, Ryan Adams, Ringo Starr, Brian Wilson, Jackson Browne, Joe Walsh, Toto, Todd Rundgren and Trevor Rabin. She has also performed live with Sting, Eric Clapton, Jimmy Page, Mick Jagger, Steven Tyler, Buddy Guy, David Gilmour and Billy Gibbons–which led to her role anchoring Pharrell and Hanz Zimmer on the 2015 GRAMMY Awards. Tal has also appeared on major TV network A&E performing with Herbie Hancock and Wayne Shorter.

Slydigs, who will make their North American debut on this tour, cite a rich tapestry of musical influences. Few though manage to personalize and capture the standards of what has gone before as brilliantly as Slydigs (http://www.slydigs.co.uk).  Imagine a mixture of 60s power pop, 70s punk rebellion, 80s post punk angst and some 90s guitar driven Britpop, then throw in a bit of glam rock as well for good measure and you’ll get an idea of what to expect from Slydigs. Hailing from Warrington in the north of England, Slydigs–Dean Fairhurst (Vocals/Rhythm Guitar); Louis Menguy (Lead Guitar/Backing Vocals); Peter Fleming (Percussion); and Ben Breslin (Bass/Backing Vocals)–are a four-piece who are wowing audiences around the UK and Europe with their unique mixture of, what frontman Dean Fairhurst calls, “Modern Guitar based Rock n Roll, infused Blues music with perspicacity.” Freshly back from a sold-out European tour with Vintage Trouble, the band are about to take North America by storm. For their inaugural U.S.tour, the band is honored to share the stage with one of their major influences, rock legends, The Who, having already supported them on their recent UK Tour and at Hyde Park. For Slydigs, this is a great way to be introduced to American audiences. Dean sums up the band’s feelings: “To support them around America is the highest privilege a band like us could be offered. Their songs and back catalogue have been a huge part of our education. Their legacy has, and still is, a daily inspiration.”  Slydigs receive rave reviews for their music.  Their latest release ‘Light The Fuse’ is featured in ‘Rock Band 4.’ Their live shows are quickly becoming legendary, collecting new fans whenever they play. Fans they treasure as “true music lovers with class.”

THE WHO HITS 50!” tour is being presented by AEG Live.  Tickets and VIP packages for the shows are available at www.thewho.com.  Citi is the official credit card of “THE WHO HITS 50!” tour.  Citi cardmembers will have access to purchase tickets for the U.S. dates through Citi’s Private Pass Program. For details visit www.citiprivatepass.com.

THE WHO have sold over 100 million records since forming in 1964; they brought together four different personalities and in effect produced a musical hurricane.  Each of them was a pioneer. Wildman drummer Keith Moon beat his kit with a chaotic elegance; stoic bassist John Entwistle held down the center with the melodic virtuosity of a solo guitarist; raging intellectual Pete Townshend punctuated the epic universality of his songs with the windmill slamming of his fingers across his guitar strings; and Roger Daltrey roared above it all with an impossibly virile macho swagger. They exploded conventional rhythm and blues structures, challenged pop music conventions, and redefined what was possible on stage, in the recording studio, and on vinyl. Deep into their 50th year, the band is still going strong, winning rave reviews.

Tags north american tour The Who