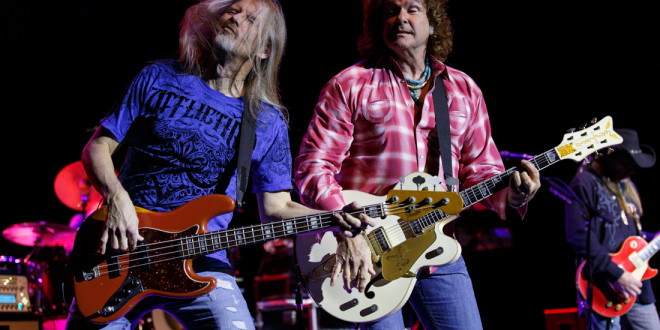 Morristown was gracious as they got to experience two of the greatest southern rock bands in history. The Outlaws and Marshall Tucker Band played at Morristown’s Mayo Performing Art Center. I’ve seen many shows as the Mayo Performing Arts Center and always love going back. The venue has state of the art lighting and sound. The acoustics are the best you can find in any concert venue and ranks up with some of the top venues across the United States (and I know – I’ve been to quite a few!). Anyways, let’s get started!

The journey into southern rock heaven began with The Outlaws. For those of you who don’t know who they are, The Outlaws are most well known for their southern rock masterpieces, including Green Grass and High Tides. Morristown got to hear one heck of an all-star set list from The Outlaws, which included many hits such as Born To Be Bad and Song In The Breeze.

The Outlaws also played a special number, Grey Ghost. Henry Paul, vocalist for The Outlaws, wrote this song originally about Ronnie Van Zant. When playing the song live, he dedicated it to Tommy Caldwell. Paul told the crowd a story about Tommy Caldwell and how he brought them a case of Coors beer after a show in Augusta, GA in 1974. The musical performance for Grey Ghost was on a complete different level – I was left with goosebumps and hairs standing on my arms.

The Outlaws closed their set with Green Grass and High Tides. Before seeing The Outlaws live, the best southern rock performance by any band that I can recall witnessing was Freebird by Lynyrd Skynrd. That instantly changed. Green Grass and High Tides started off with everyone in the theater standing on their feet. That changed shortly thereafter, as everyone stormed the front of the stage. By this point, I felt extremely lucky to see this song live. There I was, witnessing it right before my eyes. For me, this was the highlight of the entire show. I’ve listened to Green Grass and High Tides hundreds of times growing up. Seeing it live, blew it right out of the water and exceeded my expectations.

Marshall Tucker Band was up next. The guys in Marshall Tucker are something else. It’s rare to see a band taking the stage in today’s music business with every band member grinning from ear to ear. After taking the stage, they wasted no time jumping into the show. It was a show that was not staged and full of pure raw emotion. As Doug Gray stated “I never listen to a set list”. And boy, he was not kidding. Marshall Tucker pulled out some rare tracks from the archives for the fans in Morristown.

Doug Gray told the crowd that he had not done Desert Skies in about 25-30 years. The band then broke out and began playing Desert Skies. At this point in the show, fans in the audience couldn’t believe what they were hearing.

With Marshall Tucker Band having such a vast catalog of music, they went back into the archives once again and this time they started playing “Asking Too Much Of You”. Doug Gray nailed this song and hit it right out of the park. I was surprised by how well it sounded and thought it for a second that I was listening to the LP on an old school record player. However, Gray’s voice was impeccable and didn’t disappoint one bit.

One of the last songs that Marshall Tucker did for the night was their classic hit “Can’t You See”. I am certainly positive that everyone in existence has heard this song before at some point in their life. I’m also certain that everyone must see it live at least once in their life. It’s a moving collaboration between a fine group of musicians, that really puts the icing on the cake. Even though Doug Gray didn’t sing the song originally on the record, he does a marvelous job.

As I mentioned before, all of the guys in Marshall Tucker are top of the line musicians. From the spectacular flute playing of Marcus James Henderson, to the fabulous guitar playing of Chris Hicks & Rick Willis. The Marshall Tucker Band has it all and if you’re in the mood for great live music and some of the best jams around, you won’t want to miss them.

Resident Music and Photography addict from Northern, New Jersey.. USA. Got into both music and photography at a young age.. it's been history since!
@billtnj
Previous HAMSANDWICH SET THEIR SIGHTS ON THE UK
Next Album Review. Jimmy and the Mustangs: Another Round