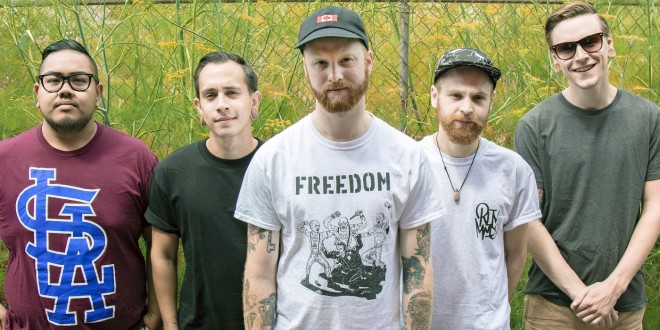 Get ready for the latest fast-paced release from Canadian punk rockers, Like Pacific. Distant Like You Asked, available now, is a relentless storm of angst and anger and stands to sit proudly right alongside punk legends such as Blink-182 and Misfits.

The Toronto, Ontario five-piece band is made up of Jordan Black (vocals), Dylan Burnett (guitar), Cam Ward (guitar), Chris Thaung (bass), and Dillon Forret (drums). Produced and engineered by Sam Guaiana at Room 21 Sound, Distant Like You Asked is easily Like Pacific’s boldest release yet, and the debut full-length album follows several EP releases. “This record is like a culmination of all our previous releases,” says Thaung. “Sam really pushed us to our limits and because of that, he really brought out the best of us in this record. We’ve definitely grown a lot and I think Distant Like You Asked is a perfect way of showcasing where we are currently (and where we’d like to go) as a band.”

Distant Like You Asked wastes no time diving headlong into the modern punk genre with fast, bitter, and angsty lyrics in “Richmond.” Moving right along, “Distant” clearly portrays that feeling of being completely fed up with a relationship that you had poured your all into, and had done everything that was asked of you, only to be alone in the long run. “Worthless Case” keeps the angst rolling in waves. Says Black about the album’s single: “I wrote this song about how I put genuine time and effort into getting to know someone, and after 3 months of being ‘just friends,’ I felt worthless and wondered how many times they had done this before.”

With lyrics that remind me of a few Fall Out Boy songs,  I feel “Assisted Breathing” is about trying to get through to someone the fact that you can’t keep doing everything for them, and that you need to do your own thing now.

“22a” starts off like a Blink-182 song with the clear picking of guitar strings and gentle singing that quickly gives way to your typical angry punk rock chorus. This track, about giving your all for someone only to have the end result crash and burn, is the slowest track on the album at mid-tempo. It also serves as the turning point. From here on out, the rest of Distant Like You Asked becomes steadily angrier.

“Commitment” is a track about trying to get away from the responsibilities and, well, commitments that only hold you back and make you miserable. On the other hand,  “Hang,” the polar opposite of the previous song, is about giving a relationship another chance even though you know it’s going to inevitably fail again.

“Chine Drive” slows things down momentarily for the opening verse as Black sings about trying to keep someone at a distance in the interest of self-preservation. At about the final 30-second mark, the song ends just before the band kicks back into a lead-in for “Dim.” This is an interesting track that constantly shifts between mid-tempo and a faster pace.

Closing out the album with the most angst-laden track, in my opinion, is “Scarred.” This intensely bitter song is something many of us can relate to as the lyrics express what it’s like to expose your vulnerabilities to someone who takes that for granted, adding to your scars in the process.

Just in case you haven’t gotten the memo by now, Like Pacific has released a bitter and angry album that is more than worthy of the punk label. Distant Like You Asked is full of relatable lyrics combined with thrashing riffs to help the listener release their pent-up rage. The album is available now via the band’s merch website and iTunes. You can also stream Distant Like You Asked and Like Pacific’s self-titled debut EP on Spotify.