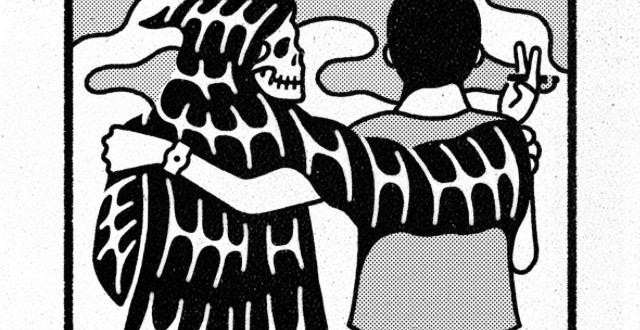 Feverwar has a new EP titled Bible and Sword that contains six tracks of very raw, straightforward, and guttural music. The quintet originates from the Chesapeake area in Ohio and plays a rock-n-roll style all of their own, mixing heavy rock and relentless hardcore. Feverwar is Nathan Blake on guitar and vocals, Abraham Bentley on bass, Nicholous Thomas on vocals, Jeffrey McClelland on drums and vocals, and Jaydon Bennett on guitar.

The first track on the EP is ‘The Disease’, a bareboned and gritty intro, with high and raspy vocals. It punches you in the ear and sets the ground for the second track, ‘3 matches, 6 shots’. This song is aggressive and loud, leaving all sorts of finesse behind in pieces. It ventures into some quality headbang and mosh pit moments of hardcore rock.

‘The American Dream’ plays with different styles and searches for an identity to call its own. It has the essence of hardcore rock but you can also briefly hear a style reminiscent of the Beastie Boys rap/rock vocal delivery. It is the standout track of the EP.

The final song ‘Quarantined’ is a slower song compared to the rest. The guitars overpower the bass and drums throughout some parts, along with the repetitive lyrics stating “Get to the point” more often than not. The song is 8 minutes and 18 seconds long. As their final track Feverwar could have halved its length and invested more time in quality content so they could have had a stronger ending for Bible and Sword.

For more info on this band check them out at the links below: