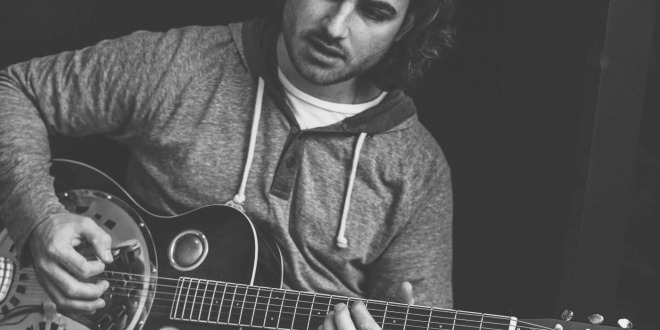 This is the full package, straight out of central casting. Josh Phillips sports a movie star’s good looks, youth to burn, a strong sense of self-promotion, and legitimate musical skill. He’s an attention-grabbing vocalist and insightful, entertaining songwriter. His debut EP release New Beginning recalls Nashville much more than the mean streets of his native Chicago and no one will connect its slickly produced and lushly melodic modern country with a graduate of the Berklee School of Music, but Phillips confounds expectations over these six songs and positions himself as one of the unsung young talents working today.

Like the vast majority of young songwriters, Phillips focuses on matters of the heart for his subject matter. New Beginnings is a work intent on personally connecting with its audience. “Completely Out of You” is smart, engaging songwriting that effortlessly connects. His sharp use of language and smoky vocals help dramatize the subject, but it’s his disciplined approach that wins the day. There aren’t any unnecessary theatrics in these songs and everything works in concert with each other towards the ultimate goal of entertaining listeners. His tastefulness comes to the fore on “Steal Me Away”. Slowing the tempo and adopting a darker, minor-key air gives the song tangible atmosphere without ever seeming showy or overwrought. Phillips gives an equally modulated vocal performance that avoids histrionics in favor of nailing down every word. “A New Tomorrow” marries beguiling musical lyricism with a thoughtful, vulnerable lyric. Phillips helps the words come to life with a spellbinding vocal once again proving that it isn’t technically gifted voices that leave us with lasting memories, but instead, those voices who sound like they’re singing for their lives. There’s deep conviction and experience in his voice.

“Leave in Love” plays like a more languid take on the preceding track and, like much of the EP’s material, features a strong chorus. The track shares the same acoustic spine as the earlier track, but the melody has a sparser quality. Phillips ends the EP on a decidedly high note with the final tracks. “Inspired” is a rousing, piano-driven R&B gem eliciting Phillips’ most impassioned vocal yet. The lush orchestrated touch accompanying the keys has a pleasantly ethereal quality. Phillips turns towards rootsier sounds on the concluding “No Sleep Tonight”. This is a loose and fun-loving blues homage with a smooth Phillips vocal that handles the traditional twists and turns of this genre with surprising confidence.

New Beginnings has variety, strongly traditional material, and a strong sense of self. Phillips is capable of slipping into multiple roles as a singer and songwriter while never losing a shred of credibility. His songwriting touches on universal themes without ever leaning too heavily on cliché and the musical backing throughout the six songs is consistently top notch. Josh Phillips is force to be reckoned with in the present and New Beginnings is evidence of his boundless potential.

Insanity looms, on the current single by New York based Indie Rock act, Emodulari.  The …