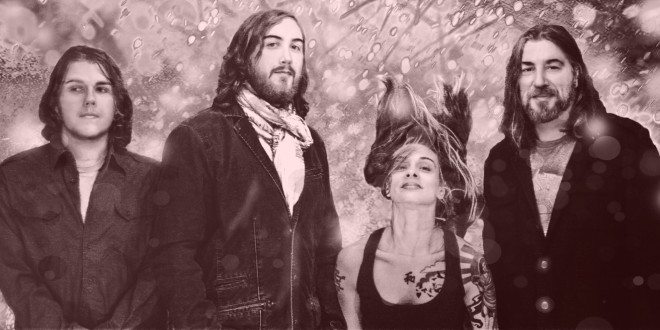 Rock n’ roll isn’t dead, it’s just that the more authentic versions of the art form have burrowed themselves deep underground to make music on their own terms without the restrictions set by big labels. Taking the best of 80s punk, late 80s/early 90s noisy shoegaze and the rampant, monstrously amplified riffs of 90s grunge/hard rock (and to some degree the 70s); Charlotte, North Carolina riff exploders Grown up Avenger Stuff have a knife-edge sound with a good split sensibility that wavers between hook-y melodies and battering ram riff noise.

Groove, propulsion and constant forward motion are the name of the game on lively intro slammer “Brother.” The riffing is so hot-blooded that it makes recent popular power chord dealers like Wolfmother and The White Stripes sound tame by comparison thanks to a thrashing rhythm section that ruthlessly thrashes their way into a series of punk rock death throes. Though vocalist Deirdre Kroener has a belting, go for broke power to her vocals, she’s got enough bewitching melody in her pipes to help her rabid preaching elevate beyond a status that’s simply yelling for yelling’s sake. The gospel tinged vocal harmonizing towards the end of the song (placed atop a thundering tom-drum beat from skin-hitter Tyler Thomsen) is the extra icing on the cake that makes it a memorable slab of pulverization. “Wasting the Light” flirts with acerbic/atonal guitar chord patterns that echoes and delays in the fine tradition of Joy Division with Kroener’s wispy voice absolutely hypnotizing the eardrums with an overload of emotions that matches the stop/start, near caterwaul of the music which often touches back down on delectable melodic elements… Still, twitchy, nervous punk pumps through the veins of this beast and just as often as the band muses on melody, the guitars and bass stir into a soup of gritty, frenetic riff-work that is anything but Light FM radio fare.

“Love Please” grinds to a mid-tempo crawl draped in drippy, pretty psychedelia with taut melodic vocals and ringing, pinch-y post-punk guitar magic. Swells in volume expel gasps of dirty, deviant guitar riffs carved from 70s rock granite but soon the proceedings drop down into aquatic bass dips and colorful smatterings of plucky, walking bass lines. The quiet is bludgeoned with destructive stoner riffs, clattering drum fills and violent pick slides, giving more than a glimpse of Grown up Avenger Stuff’s chaotic multiple personalities but the music often trips away into to truly astounding melodic repetitions with expressive vocals that hang onto the instrumental melodies for dear life. Slinking, swaggering and scowling with foundation shaking of blues-damaged punk, “Vision” is a standout track from any vantage point. Kroener yelps like Chris Cornell in his SST days over a whiplashing hard rock/punk hybrid that takes no prisoners. Curtain call cut “Game” perfectly strides across the band’s two most distinct facets; the psychedelic, goth-y post-punk twist left burning amber beauty and their roaring vocal fronted onslaught of punk-rock abandon and sludgy, groove-oriented riff/rhythm shakedowns…like a classic rock band gone down to Hell that came back as something entirely different.

If rock n’ roll isn’t dangerous and mysterious enough for you anymore, Eclectica should give you the fix that you’ve been sorely lacking. The music lives up to the EP’s title…this is an eclectic tumble weed roll through dangerous terrain where scenic views are smashed to pieces by hard instrumentation and frenzied sonic debauchery. Grown up Avenger Stuff are as deadly as they are seductive and anyone that likes the tougher side of the rock genre should give this band a dedicated listen ASAP!