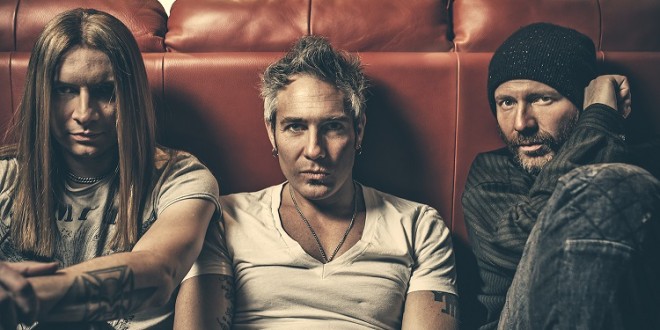 International Industrial trio Army of the Universe has released their long anticipated Magic EP + Remixes. Featuring 3 original tracks, “The Magic”, “Really?”, and “Acid Flows”, as well as remixes from Bass heavyweights Gosteffects and Deorro, The Magic includes a range of electronic flavors for both Industrial enthusiasts and dance music fans.

Click on image to watch Army of the Universe “The Magic (Deorro Remix)” Official Video:

Early Praise for Army of the Universe’s The Magic

With its dark beat and haunting lyrics, the heavy electro rendition of “The Magic” is made for grungy dancefloors and forbidding warehouses, alike. – Your EDM

This new version of “Acid Flows” is an absolute bomb that would terrorize any setting it was dropped into, no matter if it were a big festival, a club or even a house party. It’s one of those tracks that’s good no matter where you hear it. –The Music Ninja

Melding elements of electronica, rock and industrial, the music of Milano, Italy-based group Army Of The Universe is as addictive as organic, freshly ground coffee. – PureGrainAudio

The new Magic EP + Remixes by Army Of The Universe is a tasteful sampler to anticipate the band’s upcoming album (summer 2016).

Army Of The Universe was founded in 2008 by Electronic Dance producer Trebla (aka Albert Vorne) and lead singer Lord K. In 2010, guitar player Dave Tavecchia joined the band and one year later Chris Vrenna (NIN, Marilyn Manson, Tweaker) co-produced their first album Mother Ignorance (Metropolis Records). Army Of The Universe’ sound is made of analog synths and blade guitars, speeding around the echoes of 80’s vibes and 90’s industrial, throughout the underground of Brit’s school electronica, new wave and techno beats.

The band and their debut album Mother Ignorance have been considered one of the newest and most exciting surprises throughout both the industrial and rave scenes.  Between 2011 and 2014 the band toured North America and Europe for over 80 shows, including several DJ set gigs, a mix of dark underground sounds with live vocal performances. In the meanwhile The Army released one more EP on Metropolis Records, Until The End followed by a second album, The Hipster Sacrifice, and a new single, “Uniforms”, in 2014. Their experimentation also landed the band on Dim Mak Records for Kill The F* DJ EP and the single “PNKRZ!”