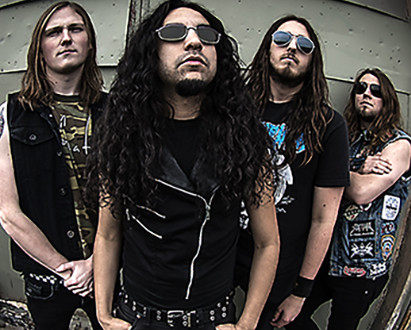 Says Hatchet’s founding member, vocalist, and lead guitarist, Julz Ramos: “We are absolutely thrilled to announce our next tour as direct support to none other than the legendary Metal Church! As many loyal fans may be aware, they have rejoined forces with their former vocalist Mike Howe. This is not only a treat for us as a touring partner, but as avid fans of the band and especially the Mike Howe era, and we can’t believe we are fortunate enough to share the stage with them on such an important tour. Hatchet Fans can expect a set list which will heavily focus on our new album Fear Beyond Lunacy. We look forward to tearing up the East Coast and beyond this Spring!”

After self-releasing two demos, Hatchet’s debut album, Awaiting Evil, was released in mid-2008 via Metal Blade Records. The album was well-received by thrash enthusiasts around the globe and proved a great beginning for the band. In 2013 Hatchet signed with The End Records releasing Dawn of the End and in October 2015 their latest, Fear Beyond Lunacy. Over the years the band has criss-crossed the US several times touring with Soilwork, Jeff Loomis, Threat Signal, Black Tide, Cellador, Exmortus, Flotsam & Jetsam, Doyle and Kobra and the Lotus. Plans are underway to continue their live assault throughout 2016.

Previous Metallica To Reissue Kill ‘Em All And Ride The Lightning
Next BRIAN ‘HEAD’ WELCH Returns With New Book ‘With My Eyes Wide Open: Miracles And Mistakes On My Way Back To Korn’ Due Out May 17