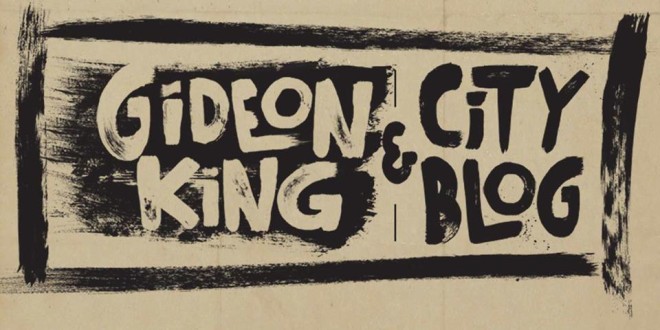 Gideon King and City Blog’s self titled album is a jazz/pop/soul swirl of sound with an assortment of members that make up the group, each bringing their own eclectic sound to the LP.

“See in Double” is the second track on the album and also one of the strongest. The lead vocals are full of soul, and will leave viewers in a relaxed and soothing state. The horn section, coupled with the always fabulous piano, adds a level of sophistication to the tune which also lends itself to the lyrics of the song which paint a vibrant picture of New York. This is a theme that will be continued on other tracks on the album, but it is never more effectively done than on this particular song. It also shares some resemblance to the more recent music that fellow musician Mayer Hawthorne has put out. It’s like a step back in time, and with its effortless feel Gideon King and City Blog are able to capture a vibe that so many artists seek after.

Continuing on an ode to New York trend, “New York Is” is a love letter to the big apple. Male and female vocalists take turn singing on this track infusing their own style into it. There’s no denying that there is a touch of an R&B feel to it, especially when both vocalists come together, but with a glorious electric guitar and saxophone solo, there is also a rock and jazz element which brings an interesting flavor to the track. The lyrics make no apologies for loving New York City and all it has to offer including style and friendship and that is part of the simple beauty of the tune. When the chorus strikes and the vocalists sing in unison “New York is perfect now and then” one can’t help but feel a swell in their heart for the location, even if have never traveled there. And that is part of the magic of “New York Is.”

“What Say You” starts off with a gritty flavor in its instrumentation that leads into crashing percussion. But the song itself has a clean and flowing feel to it. Here a female vocalist takes center stage in a R&B ballad that also borders on pop. There is a theatricality here that is never felt more than here and that is thanks to the mesmerizing lead vocalist who leaves listeners feeling like they are on the same journey as her, which is a feat in itself. It’s hard not to get lost in the track, as it glides along easily and is pleasurable to the ears, making it one of the most memorable pieces on the LP.

Meanwhile “Dirty Bastard,” takes on a different tone and manages to surprise listeners late in the album. It begins kind of slow, and with a piano tinkling in the background it has a very lounge singer feeling, but by the time the song reaches the chorus it reaches its full potential as the male vocalists smooth vocals cut through sharply, singing about said dirty bastard and then later on about how all the “so called friends in this town check your car out/check your evening gown.” There is an undercurrent of darkness here, but put together in a ballad fashion it comes across as something internet famous PostModern Jukebox could have arranged.

There are some weak spots on the album, like most records have, but they mostly just leave one feeling ambivalent towards some songs instead of finding many concrete faults with them. “Friendship Cliché” starts with a terrific echoing chant and has a more funky sound, along with the sound of a scratching record, but the lyrics leave something to be desired and the vocals are nothing too impressive. The main high points on “Glide” are the acoustic guitar intro but besides that what listeners get is pretty standard. Though it does have a heavier feel to it, the vocals are something we have already heard before and offers nothing new.

It is worthy to note the last track on the LP “Broken Noise” fuses together all of the songs that have come before into one interesting tune. Both lyrically and melody wise Gideon King and City Blog manage to create a song that is anything but broken. Structurally it is a piece of art to be marveled at and feels like a reprise in a musical making it very unique.

If one is looking for some easy listening music without having to go out and spend a lot of money on a concert, let Gideon King and City Blog bring the concert to you instead. I promise the outcome will be just as worthwhile.