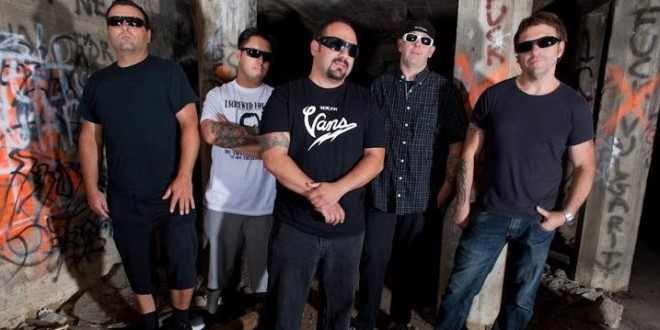 The melodic hardcore/alternative punk clan, Implants are thrilled to announce their forthcoming EP due out late this spring via Cyber Tracks, a label owned and operated by El Hefe (NOFX) and wife Jen Abeyta. Implants are a unique clan of musicians culminating from bands Strung Out, Pulley, No Use For A Name, The Tank (Brown Lobster Tank), ex-Face to Face, and ex-Death By Stereo. The band recently welcomed Matt Riddle (Face to Face) to the band. Implants guitarist/vocals, Rob Ramos exclaimed, “we have had some changes in the band on this EP. With Matt Riddle joining, and the musicianship he brings, I feel like we have no limitation on how progressive we can get. I can’t wait to play this stuff live.”

Cyber Tracks label owner, Jen Abeyta had this to say about the release:

“Hefe and I are so ecstatic to release another Implants album! This EP is beyond fulfilling …their debut album blew me away so much that I never thought it could be surpassed, but they definitely outdid themselves on this EP. I wish it was a full length …after listening to 5 tracks of pure shredding melodic punk, I’m left wanting more.”

“We are all really stoked on the way the band and these songs have progressed. And with the addition of Matt Riddle it feels like we have all the pieces to conquer just about anything.

To say we are happy with the EP is an understatement. We all worked our asses off, overcame some challenges in the middle of the process, but can say that we’ve
created a record that we will look back on with pride.”

TRACKLISTING:
1. Desperation
2. All for Nothing
3. The System
4. Sage
5. Come on Come on (cover song by Cheap Trick)

CYBER TRACKS:
Cyber Tracks is a Los Angeles based record label founded by El Hefe (guitarist of NOFX) and wife Jen Abeyta. Cyber Tracks has the mentality “for artists, by artists” which promises to empower bands by allowing them to share control, revenue, master ownership, and decision making equally. Cyber Track’s roster currently consists of Margate, Implants (featuring members of Strung Out, Ten Foot Pole, Pulley, and Death By Stereo), Warner Drive, Counterpunch, and most recently, This Legend. For more information: Cyber-Tracks.com