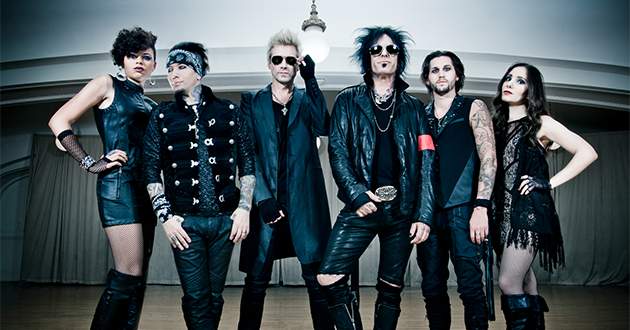 SIXX:A.M., comprised of bassist Nikki Sixx, guitarist Dj Ashba, and vocalist/producer James Michael, have announced the March 1 arrival of new single, “Rise,” from a forthcoming first volume of a double album, coming in 2016, with Revolver Magazine today.  The band has revealed that they will be bringing the heat all Spring long for a haul across the US and will make their way through Europe in June. Continuing to keep fans on the edge of their seat, the band hints the there may be more exciting news coming down the pipeline with the launch of a demand campaign video message, urging fans to request the band perform in their city!  Check out the personal video message exclusively from James Michael HERE, on Revolver Magazine, and be sure to demand that the SIXX:A.M. crusade brings their newest batch of hard rock to a venue near you – make your voice heard!

2016 will bring the band across the US with SIXX:A.M., making them a staple at major rock festivals including Fort Rock Festival, Rockfest, Rock On The Range, and more. Order tickets to festival dates here! See tour dates below and more info at the newly re-launched website, and be sure to keep your eyes peeled for more SIXX:A.M.announcements.

The upcoming single, “Rise,” is a true testament to SIXX:A.M.’s powerful call-to-arms mission of uniting the masses, calling them to stand up for their beliefs.

Of the single’s message, Sixx offered, “We are not a political band but we are extremely reflective. During the making of this album, we were under the same media siege as the rest of the world, so ‘Rise’ came out of that and hopefully reminds people that we all have a voice.”

Expanding, Michael proposed, “Throughout history, some of the most dramatic changes have occurred when people reject the status quo and demand change. ‘Rise’ is about how we find ourselves at a global tipping point and how it is our duty as citizens of this world to come together, communicate with one another and rise up to demand more of ourselves and our leaders.”

Echoing Sixx and Michael, Ashba continues, “’Rise’ to me, is a message of empowerment. It will take on a personal meaning to everyone who hears it, but the message is the same. Whether it’s an individual trying to overcome their own struggles, or a nation as a whole, we can all rise above the negativity, if we stand up for what we believe in.”

The band will also be making appearances at several European festivals this year, notably Hellfest, Rock Am Ring and Rock Im Park.