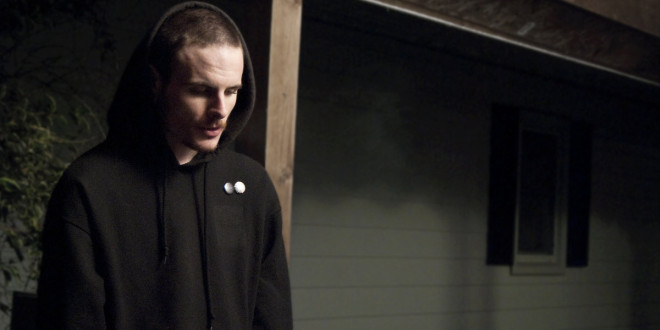 With Brian Hansford as Molly Drag, no one ever knows quite what to expect. While there is always a dark undercurrent to the songs on Tethered Rendering, there is also a glimmer of hope and a lot of innovation.

“Worms” is the most visual track on the LP as Hansford paints a relationship where he finds himself lost in his partners “horror chamber.” As he sings “I let my heels get eaten by worms” one can very nearly see the main figure of the song being consumed by the wriggling creatures. While this tune is a bit more mainstream, in the fact that the vocals and melodies are very simple in an indie fashion, there is always that bit of edge poking through with unsettling instrumentation to match the lyrics. If one is looking to introduce themselves to Molly Drag, the safe and most accurate place would be to start here on “Worms.”

Following up that track, back to back is “Choker,” and it doesn’t get more sentimental or complicated than this. Hansford notes right from the start that he wants “all the best” for the person he is singing to. So rarely do we get to see this side of Hansford, and though there is an element of a sorrow and feeling lost, and Hansford admits that he is a “flawed machine,” for this one song listeners can lose themselves in a story where Hansford is not the only one struggling. “I want you to feel all the precious times I would die for you,” he sings and continues “I’d run with you through the caterwaul.” It is clear that this relationship may mean more to Hansford than any other he speaks of on the album. The tune is quiet, but it is also the most brave. Though it may not have the same experimentation that other tracks on the LP have, Hansford succeeds in letting his voice do all the talking, relying on nothing else to get his message across. With this stripped down approach Hansford is able to effectively get to the root of “Choker” which comes forth in the lyrics “please don’t forget to love yourself/I know that life is shit and the world is sick but you are not.” There are lives and real beautiful and deep emotions here and Hansford does not need to mask the tune with sound bites or any other embellishments to have it be a great piece of music.

“It Manifested” comes as a bit of surprise near the end of the album. It is the most upbeat track on the record and has a country/folk vibe. Of course Hansford still carries his mellow voice with him here and relies on his lyrics to get his morose thoughts through to listeners. “It manifested in our 20s/confusion and anger you see/Lucifer Screams,” he describes of his growing up. The contrast between Hansford repeating that he lives “on the hatred of man,” and the toe tapping instrumentation is just another way that Hansford is able to dabble in something different and jolt listeners without all the bells and whistles of some of his more unsettling and jarring tracks. By that alone, “It Manifested” becomes a treasure waiting for listeners to discover on Tethered Rendering.

The second track on the album, “Thirty Stitched Up Swell,” is where Hansford finds his alternative rock sweet spot. His vocals sound like a mix of The Shins and The Beach Boys and the instrumental background music tinkles with such an ambient flavor that it feels like fancy dinner party music, but actually worth listening to. It’s dreamy and hazy and one pays attention to the lyrics one will find that behind the soothing voice is in fact a very depressing story, “we lock our windows, /To avoid the cold dead air./Inside of your house.” What exactly went down is still left up for much speculation, as Hansford’s cracking his head open can be interpreted in many ways, especially when we are dealing with an artist who often leaves his emotions wrapped up in poetic lyrics, but that is just one of the many beauties of “Thirty Stitched Up Swell,” and makes it the definitive highlight of the album.

What most listeners will take away from Tethered Rendering is just how far Hansford will go to push the envelope on a song. For example on the title track there are no clear discernible lyrics at all. Overlapping spoken vocals from various sources make up most of this tune which rests behind a dreamy landscape. But if one thinks this bit of musical display is unusual they have much more in store ahead of them. “Found a Gun in Montreal” could come across as almost soothing if you ignored the actual lyrics which read “the street of Montreal unveil our blood red hands/sentiment is fleeting without a quoted cost/I feel the sudden intuition of an evil crooked cross.” Paired with sound bites of a woman screaming “This family is screwed up” and a male voice talking about what seems to be a dead body it makes up a grand seedy story. Elsewhere on “Levi Simon Trail” it is not only Hansford’s wailing like a ghost haunting his own life that builds up the tension, or the use of lyrics such as “I’ll try to push away/to see the demon living deep beneath the river/when the lake’s frozen over,” but the bit of added on phone call with nobody on the other end, except for some crazy laughter, that really gives the track an extra bit of spookiness.

Molly Sparks dares listeners to come on his journey of the gritty underbelly of life, and if you’re willing to join him, its one Hell of a ride.

retro music enthusiast. Dreamer. Kind of odd. Writer
@twitter.com/for_no_one1014
Previous Check out the new single F*ck it by Celwitdabag
Next Under the Bodhi Tree – The Selfish Generation (EP)