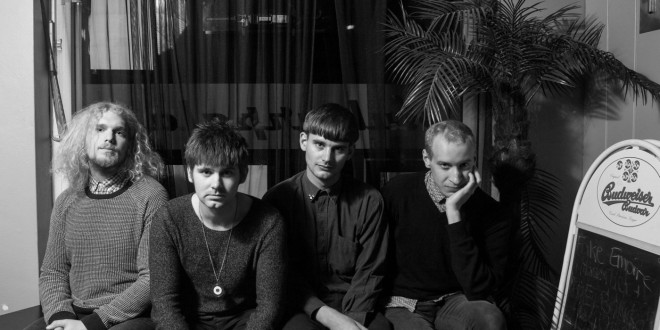 Single Review: The Bongo Club – All She Said

Rising dance-punkers The Bongo Club surge in delivering the invigorating and especially infectious appeal of modern rock that has gone MIA for some time now. Having just formed nearly three years ago in their humble town of Boras, the Swedish quartet has definitely sustained New Years bliss with their latest single “All She Said”. The appeal it has carried over since its debut late last year not only shows promise on a sonic level, but also encourages high times full of genuine fun.

A combination of nostalgia and rawness from the previous decade’s initial period of rock was what immediately drew me into the single. I can tell it passionately channels the nuances of that era’s prominent, yet underappreciated garage rock revival movement, from the energy of the riffs to vocal tonality. On a stylistic level, the drum feel compliments the bigness of the combined rhythm and lead force of the intro. The chorusing effect on the song’s lead melody is certainly bright, but also has a quality of wetness that brings out the rest of the instrumentation. The verses are substantially involved, shifting from simple, few-note hooks to more progressive chugging reverb textures. Every moment that snare buildup transitions out of each verse, you know you’re in for an addictive, layered chorus to be continuously hummed for hours on end.

Overall, the song is a strong presentation of passion, talent, and heart. And while there isn’t much in the way of innovation, its general live aesthetic holds an enormous advantage over a great many contending rockers out now. It has already become quite the hit, undoubtedly nourishing a worldly power pop audience’s appetite even without label support.

More info on The Bongo Club:

Check out the single’s accompanying video:

I come from a family who is passionate about all things music. I learned to sing at an early age, and by 13, had my very own Fender Strat guitar. I tried my hardest at learning all that I could. Because I was born with cerebral palsy, I had to teach myself an adaptive playing style. I learned to write and record my own music, despite these difficulties. In college, I started making great use of my writing abilities by reviewing music, as well as copy editing. I guess it's best to stick with what you know, while welcoming a fair challenge at the same time.
Previous Self Help Festival Takes Over Southern California in March!
Next Zardonic Joins Dream Theater, Megadeth, Conquer Divide, and Fleshgod Apocalypse on Tower Records Japan Top 5 Hard & Heavy Chart