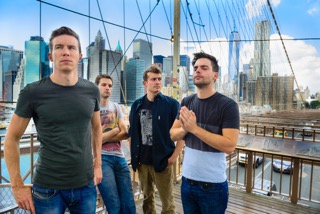 After 2 huge US tours (alongside Alien Ant Farm and Fuel), taking in 38 states and 24,000 miles, London 4-piece H2NY will release their debut album ‘Tremor’ on April 15th via Unconditional Music.

“They will blow the roof off the industry with their scintillating ballad-esque writing and cheeky humor” – Shutter 16
“A stand-out group. Definitely one to look out for” – Record Collector

H2NY deal in anthemic, radio-rock hooks.  After the 2014 release of their debut EP ‘Treading Water’ they embarked on their first UK headline tour, before going on to make appearances at the Hard Rock Calling Festival in Hyde Park and headlining Trafalgar Square as part of the Closing Paralympic Celebrations.  Now comes their debut album ‘Tremor’, from which you can hear first single, and album opener, ‘Bleed’.