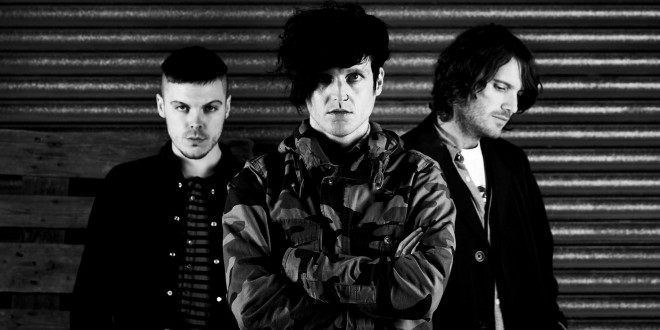 Hailing from Macclesfield, England, the Virginmarys make anthems that scream with all the potent sound and fury of modern punk acts, brimming with the honesty of prime British rock of the early 1970’s, before the wizards and capes overcame the attack and dynamic.

The UK based three piece recently returned with a staggering new track – “Into Dust” – an erratic call to arms about the disillusionment and boredom that creeps into everyday life. With jagged riffs and an erratic bassline, the song bleeds with a sense of urgency that is impossible to ignore.

Today, the band arrive with explosive visuals to match the track, streaming exclusively on YahooMusic.

The band recently announced a string of new dates opening for Shinedown and are thrilled to be coming back to America, after having last played here at some “surreal” radio-sponsored festivals in stadiums with Soundgarden and Pearl Jam and a mammoth 14 shows at SXSW in 2013. The U.S. has been good to the band after they became a hit on radio, with singles ‘Dead Man’s Shoes’ and ‘Just A Ride’ hitting the Top 30 Alternative and Active Rock charts in the US and Canada. “America was a massive headfuck really,” says Matt, “but it was an amazing experience, because you hear so much about it as a musician, to actually be there was a dream. It was insane to think that I played in Las Vegas. I never thought that day would come.”