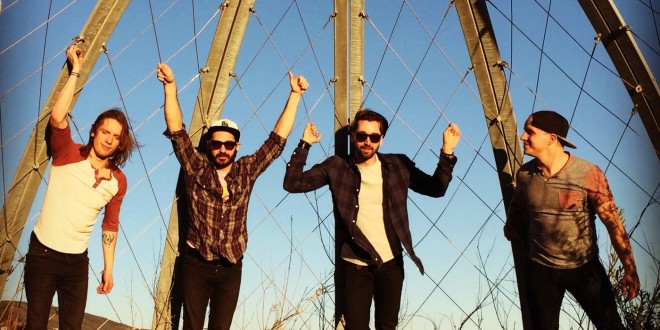 Call them modest men making monumental music. The members of Boston’s The Wild Waiting possess a self-effacing quality rare in young musicians so extravagantly talented and it isn’t a stretch to think fame will never touch that while hearing their debut. The six songs on the band’s EP Stay Gold grip listeners with their clear earnestness – they are practically irrepressible. The Wild Waiting, lead by vocalist Gav, play with the beaming confidence and energy that has been the providence of youth since time immemorial. While they embrace traditional structures and subject matters, they express themselves in an individual way and sound thoroughly modern throughout.

The songs veer between pure pop rockers and theatrical, magnificently staged quasi-pop symphonies. The former dominates the album and the band’s songwriting confines itself to commercially tested subject matter, often centered on the joys of seizing particular moments in life while musically testing itself with consistently good, coherent melodies sure to lodge themselves in many memories. “Say the Right Words” rates as high as among the EP’s most commercially minded efforts but its lunge for widespread appeal shouldn’t be viewed as a slight. Many long-standing bands would likely kill for such well-arranged material and the band delivers it well. “Someone to Go With” and “2AM Fearless” dive in with much of the same brimming urgency. The first song matches the bright promise heard in “Say the Right Words” while the chorus suffers slightly in comparison. The second track, “2AM Fearless”, assumes a more menacing air than the rest of the album but the music lacks the same depth heard on other songs.

“Burn with Me” marries the band’s melodic sensibilities with a strong sense of dynamics that the title track expands on. Lead singer Gav mixes equal measures of longing, fear, and menace into perhaps his best vocal on the EP and the track’s comparatively low key approach help make “Burn with Me” one of Stay Gold’s more memorable moments. The EP’s true highpoints, however, come with the opener and last track. “All My Life” kicks Stay Gold off in epic fashion with a brilliantly rendered pop anthem capable of moving all but the most jaded. The bright keyboard textures and rocketing tempo carry things along at a brisk pace while the vocals help push the chorus over the top. The final song, “Stay Gold”, is an unexpectedly ambitious curtain for an EP already guilty of confounding expectations. The compelling juxtaposition of acoustic laden verses with the EP’s biggest chorus yet will startle many listeners and the stately march they conjure has a vaguely progressive feel. This isn’t canned pop music, but instead, exquisitely crafted popular music that engages its audience in a multi-sensory way.

Stay Gold is a memorable entry in the indie pop world and makes no secret of its desire to impress. The band plays with enormous confidence and negotiates their way through stylistic shifts that few veteran bands would even attempt. Their sincerity shines through in every composition and never falls into self-indulgence in a genre renowned for that very thing.