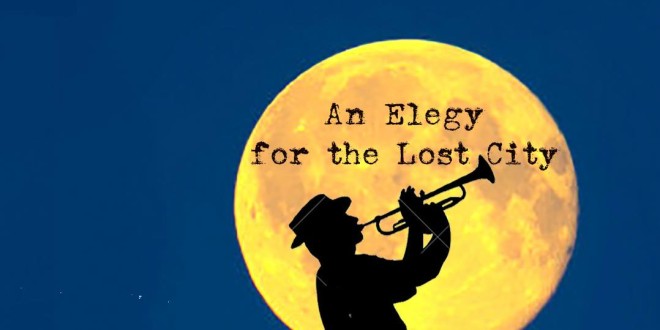 Johnny Goldstein – An Elegy For The Lost City

Johnny Goldstein – An Elegy For The Lost City

Johnny Goldstein is a Woodstock Generation New Orleanian, forced upriver to St. Louis by life’s circumstance. An award-winning songwriter/composer, guitarist, beloved teacher and producer and now, an author, Goldstein was influenced by Dickens, Twain, John Irving, Vonnegut, Kozinski and Koontz. He’s an easily-crazed Cardinal fan, a passionate cook, gardener and critter lover, and much to his surprise– for the last 30 years a serious meditator, preternaturally drawn to an ancient Tibetan lineage.

Music that seemed to flow through the pages of Elegy in tandem with the offbeat characters proved to be the perfect, compelling narrative for a next generation of audiobook to accompany the novel. Inspired to create what Goldstein calls the “World’s First Audio Book in Radio Form,” the audio work is essentially a throwback to classic radio drama from the 30s and 40s. In many respects and with better technology, it is more like a modern film soundtrack overflowing with the music that defines New Orleans as well as the panorama of rock ‘n roll legends influenced by the City’s iconic musicians. The Beatles as well as Satchmo and Randy Newman plus dozens of other musical artists set the backdrop for this old-school radio drama heightened by the lush, ambient sounds of everyday New Orleans. Rock ‘n roll took a back seat somewhere with Johnny and the rest is history.

An Elegy for the Lost City is based on three characters from Goldstein’s original songs. The fiction series would not exist had his performing career not been ended by a 2006 car accident.

This is the story of three people and their New Orleans environment which takes you on a musical journey that an audiobook is absolutely perfect for because the author himself is a musician. This involves some great atmosphere applied to the spoken words of Johnny Goldstein himself. It goes in and out of some brightly detailed situations and the songs help all the more in describing them. While I cannot comment on the book itself because I haven’t read it, the audiobook seems to cover everything needed, but in doing so it compels to buy the book too. Both line up well just from hearing it. Talk about the battered Big Easy, this is fantastic when you hear how he fantasies with characters from his songs. It all plays like a radio show, so it is sort of a throwback that way, harking back to some of its 1978 situations.

If you’re reading the book, the narration is instant but the audiobooks begins with a couple of tracks to musically establish the feel. One of the tracks in the middle must be mentioned, “Prologue” goes into the depths of it all and Harry Connick Jr is of course one of the subjects of narration. If you skip around through the book you can also enjoy it without having to take it all in with one sitting. You get some great tunes, such as “Don’t Think Twice” which is subtitled (My Favorite Vocal Performance), this is a good way to sink your ears into the artist himself.

Rather than give away everything there is to chew on, you have to see and hear for yourself some of the greatness to be found on this. There are other musicians involved as well, such as “Feelin’ Alright” cover by the Gayland Titus Band & guests. It takes you through a good warm version and keeps the excitement up at that point in the book. Other tracks go in different directions such as “bloozySilent Night” by Rachel Thomas and JG. It really works by this time in the book. As this manages to encompass a lot of tracks between that and the spoken parts which usually have some music going on about them as well. You cannot fault this whole thing in any way, once you wrap your head around it.

Goldstein himself keeps your interest both narratively and musically, and that can be attributed before one listen to the whole thing. The jazz music is great but being based around the New Orleans music scene like it is, there are also other traditional genres on it, being mostly blues and rock. One has to wonder just how many musicians are on this altogether, as I’m sure it is a lot. There is a well-balanced amount of male and female vocals to be heard, and that keeps it very interesting for the music listening. Once you’re tapping your toe to stuff like the live performance of “All That Dream” you will be musically satisfied even if jazz and big band isn’t your style. This is a fantastic ride either way.

Talk of everything from Louie Armstrong to Harry Connick Jr, combined with the narration makes for a great audiobook told in radio form. After really getting into this it makes me want to look more into audiobooks for more of this auto-play sort of musical journey’s they can be. It may be flawed to one consumer or another but I find it an exercise in warts and all perfection. Get the book and see, and get the audio book and hear for yourself. Jonny Golstein is not only a good author but he’s an excellent guitar player, writer, producer and arranger.

Springing to life like a beam of sunshine in the early morning, and possibly just …