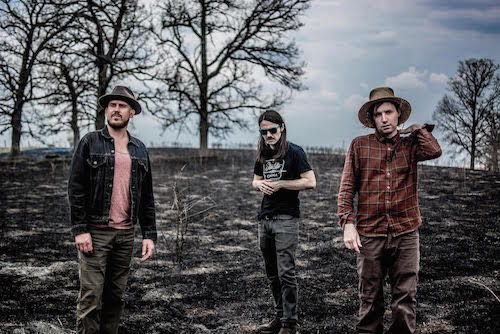 Album Review. The Pines: Above The Prairie

On February 5th, the wait is over. The Pines are releasing Above The Prairie, the follow up album to their LP Dark So Gold, which came out in 2012. Though the record at times can be uneven and shaky, it still excels in bursting moments of glory.

Long stretches of instrumentation help set apart the opening track “Aerial Ocean” from other songs on the album. Its ambient mood seeps into listeners and will keep them engaged through all five minutes (+) of the tune. This is quiet but deep folk music at its best with poetic lyrics and vocal deliveries that have some Bob Dylanesque qualities to it. As the chorus sails along one can’t help but get swept up in a wave of emotion and that is all due to the subtleties of the track which just like the ocean waves knows when to ebb and when to flow.

“Hanging on Earth” is pure poetry in motion and is also one of the most uptempo tunes on the album. The piano mixed with a steady percussion serves as the perfect backdrop for the spot on vocals that in this track in particular not only have some Dylan in it, but also some scratchy Rod Stewart. The chorus is breathtaking and sorrowful as listeners take in the lyrics: “All along the way I was dreaming/But I lost my way/Now you’re leaving me hanging from the Earth.” And while those words hit the heart, it isn’t until the second verse and beyond that the lyrics start to become golden honey, gooey in just the right way as the band sings about a “galaxy of broken hearts” and then later of “the power of a kiss in the infinite abyss.” Dripping with sincerity and melancholy it’s perfect to listen to on a cold winter day and dig into ones introspective feelings.

Never a band to shy away from pulling outside the norm, The Pines showcase their fine purely instrumental talents on “Lost Nation.” The haunting piece is incredibly moving and tells a story on its own, without the use of words. Listeners can interpret the tune anyway they like, but it evokes raw emotion from both the band and audience. Its intricate and at times commanding presence leaves an impression right from the first few notes. There is almost a spiritual feeling to track as well as hints of how that connects with nature. Incredibly powerful and gripping, The Pines showcase depth here and it is one of the most unforgettable moments Above The Prairie has to offer.

The album reaches its peak on “Here,” which sounds as if one is swirling around in the galaxy with its delicate piano movements and soaring strings. The songs uniqueness is to be praised as it comes across as almost hymn like. With collaborations from other guest vocalists harmonizing together “there’s nothing out there as far as the eye can see,” over and over a desolate story takes shape in a beautiful whirlwind of sound. If there is one track that will leave listeners with a permanent mark on their soul, it is “Here.” Though very simple in its structure, that is part of what makes the song so memorable, as it doesn’t need fancy lyrics or show off instrumentation to get its point across.

The problem with Above The Prairie is that the second half of the album cannot compete with the first five songs.

“Where Something Wild Still Grows” has great descriptive and flowery lyrics, but at this point in the record one just expects more from the band. It lacks the emotion that previous songs dealt out in spades. Everything just seems a little plain, here, and while it is far from being a terrible tune, it simply does not hold a candle to what listeners have heard The Pines do before. Similarly “Sleepy Hollow” is very lacking, although it starts off with a promising intro. It doesn’t offer anything new and because of this the song just fades into the background and becomes unforgettable especially when it is placed on a back of an album that isn’t as consistent as the first half. “Villisca” is The Pines second attempt at a pure instrumental, but it doesn’t have the same pull that “Lost Nation” had. That being said, in a world where catchy, toe tapping tunes seem to rule popular music, it’s a pleasant surprise to see a band have two instrumentals on an album. “Time Dreams” redeems the album just as it comes to a close. Poet and American Indian activist John Trudell recites spiritual and deep thoughts while The Pines provide a fitting and naturalistic backdrop to let Trudell shine. It will force listeners to think and appreciate the life in and around themselves. This collaboration sticks out in the best of ways and helps cement The Pines as artists that are worth taking a chance on.