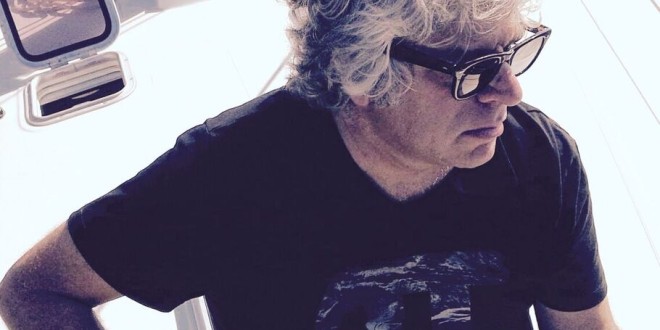 In his pursuit of a life path, Daniel Grinberg has willfully followed his own rhythm. Born in Argentina and based in Israel, the self-taught songwriter made a sizable impression playing guitar in the local Tel Aviv club scene of the early 80s. Grinberg especially realized his potential through a 5-year study at the city’s most prestigious music academy. His teaching stint there would prepare him to develop innovative composing software, landing him a fitting three-decade-long career in the broadcast media industry. But opportunity did not end there.

With a passion for music still bubbling at his core, Grinberg bounced back into performing and collaborating in the early to mid 2010s. His latest project, Short Stories, plays like a compilation of poignant life events set to music. It is a mesmerizingly sincere band effort that lists its three vocalists and producer—Alex Moshe, Aveva Dese, Yoav Arbel, and Maor Scwartzberg— right on the album’s cover. By doing so, the project is clearly emphasized as a collective unit, rather than a mere assembly of water colors bringing Grinberg’s sketches to life. Essential to competently showcasing these talents are Scwartzberg’s production values, which provide bold warmth and crispness suited to each singer’s vocal style. While presenting itself on the surface as particularly lightweight indie rock, the numerous stylistic and thematic nuances interspersed throughout its 10 tracks that keep the experience stimulating. Moshe begins the album with “80 Years,” her delivery emitting a soothing and pleasant quality that complements the song’s lyrical content. The listener is entranced in the combined sweetness of Grinberg’s guitar melodies and Alex’s vocals, while there’s a conflicting perspective of the time span (“80 years should be enough/80 years, so hurry up). Such uncertainty pertains to the real-world predicament of how well such time should be spent. On one hand the message may comes off as an inevitable reminder of mortality, but it also feels inspirational, especially given the instrumentation’s general buildup. I liked how the bass line harmonizes under the guitars as if to give the listener a helpful push forward. The momentum is raised on her second entry, “Rivers,” this time feeling more upbeat and straightforward. Its underlying concept centers on how everyone, regardless of upbringing, holds individual beauty and respectability. The guitar and vocal interplay by Grinberg and Moshe is seamless, his lead melodies complimenting her truths. Moshe also exhibits fluid blending of harmonies while concisely reinstating the theme’s importance during the chorus. Keeping with the subject matter of self-assessment, Aveva Dese’s “Hey You” comes off as more internally focused. It involves the type of pertinent questions one may ask himself when coping with a freshly broken heart (“…What do you learn from your life? /”…What will you tell to your children?) The intimate main melody works very well for this reason, as if Dese is beside the listener showing genuine concern. As it drives home an encompassing hopeful outlook for the chorus (“You know that the sun will shine on you”), the transition to heavier guitars sounds wholly better in its pacing. I almost missed Moshe’s voice until she returned with “White Fields,” an especially idyllic longing to embrace some of nature’s most endearing pleasantries. At this point I feel satisfied with what I’ve listened to, but I’m also somewhat relieved of the change of direction to come.

The middle of the album marks the debut of singer Yoav Arbel, whose chameleon-esque vocal style is an interesting feat. His first track, “The Forest,” includes a reverb-heavy monotone which complements an equally mysterious, ghostly instrumental backing. It ends up adding a whole new perspective to the song, indirectly emphasizing one’s kinship with nature once their body gives out. Conversely, his next offering, “Old Town,” sports a newly warm quality, and actually sounds much more genuine without reverb. It is also by this point that the singers begin to share thematic cohesiveness, Moshe’s “Back Home” inadvertently continuing Arbel’s thoughts while also alluding to her first entry on the album. In much the same way, Dese’s “House of Dreams” sees a common thread with Moshe’s “Beyond” in their concept of seeking ultimate release into a place of thriving and comfort. The final Arbel track and album closer, “You Give Me” is the best stylistically developed by far. Each placement of reverberated guitar feels subtle and spacious at the same time. Arbel’s voice sits nestled in with the rest of the instrumentation, and its supremely blended quality makes the song nearly perfect. But even if its length is relatively short, it has utilized every component possible to bring a not only solid, but satisfying end to the album.

Overall, Short Stories is one of those albums I can safely say took me by surprise. Not only was it by way of a versatile musician making an incredibly strong comeback, but for his ability to bring a whole new dimension to what his band members express. Daniel Grinberg is truly gifted with an ear for both the accessible and cutting edge. Should this album continue to receive the wonderfully widespread praise it has, there’s no doubt he will be able to expand his already magnificent talents anywhere he chooses.

For more info on Daniel Grinberg:

I come from a family who is passionate about all things music. I learned to sing at an early age, and by 13, had my very own Fender Strat guitar. I tried my hardest at learning all that I could. Because I was born with cerebral palsy, I had to teach myself an adaptive playing style. I learned to write and record my own music, despite these difficulties. In college, I started making great use of my writing abilities by reviewing music, as well as copy editing. I guess it's best to stick with what you know, while welcoming a fair challenge at the same time.
Previous Rum Thief @ the O2 Ritz Manchester 29.01.2016
Next Album Review: Anchor & Braille – Songs For The Late Night Drive Home