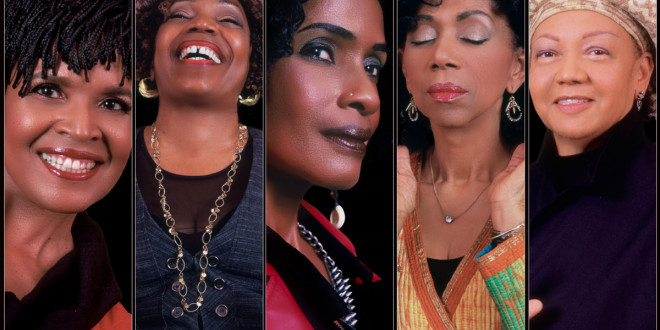 Sweet Honey in the Rock – Love in Evolution

Sweet Honey in the Rock – Love in Evolution

The longstanding and renowned female a cappella group Sweet Honey in the Rock have returned with Love in Evolution, their first new studio album in nearly ten years, and it’s a stunning reminder of the quartet’s abiding skill. It’s easy to lose yourself over the course of their fourteen tracks thanks to the powerful musical spell woven by the band’s lush harmonies, individual performances, and emotive phrasing. Stellar production renders the vocals clearly but, tellingly, fleshes out the group’s instrumental accompaniment with the same attention to detail. Sweet Honey in the Rock is intent on providing their listeners with a complete musical experience and the results are quite memorable.

The group’s social awareness runs deep and extends to community involvement, so it isn’t any surprise that related themes figure heavily into their song selection. Unlike many other similarly minded performers, however, Sweet Honey in the Rock understands the power of topical material. An excellent example of this is “Second Line Blues”. While the lyrics intersperse the spoken word names of many killed by gun related violence in recent years with powerful, straight ahead singing, the music weaves a gossamer-like musical tapestry for the vocalists to play against. The expertly placed percussion and quasi-contrapuntal bass provide quite a memorable backdrop and will still grab the attention of musical devotees long after the names of the dead have unjustly faded from memory.

Two of the album’s best examples of musicians in action are the penultimate track, “Sweet Sweet Honey!” and “A Prayer for the World”. The former delivers the goods vocally, but the dazzling percussion nearly steals the show from the singers. The restless shift of tempos, the counter-rhythms, and remarkable dexterity to pull it off is an outstanding example of what Sweet Honey in the Rock’s supporting cast brings to the album. “A Prayer for the World” is the album’s biggest all-out band effort and bubbles with impressive bass playing. The rhythm section provides much of the instrumental backdrop for the album’s fourteen songs and the quartet contrasts themselves against their playing to profound effect.

Their cover of Marvin Gaye’s classic “Mercy Mercy Me” takes a bit to properly begin, but the spoken word tribute compromising the song’s first half commands attention. Sweet Honey in the Rock transforms spoken word into beautifully rendered moments of song and, arguably, offers listeners a truer tribute to Gaye’s influence than any straight cover could have offered. The performance testifies to the group’s stylistic dexterity and mastery of form. Nearly every American grown musical genre makes an appearance on Love in Evolution – the group’s invocation of blues, gospel, jazz, and R&B is note perfect and never sounds forced.

The album’s finale, “We Have Come This Far”, personifies the group’s vision in some respects. While they are unafraid to tackle uncomfortable subjects head on, Sweet Honey in the Rock ultimately promotes a life-affirming, optimistic message acknowledging the blows we’ve all suffered while still looking towards a brighter day. This is a quality pervading nearly every second of Love in Evolution. Sweet Honey in the Rock has returned and the world is a better place for it.

Previous Hands Like Houses Debuts “Colourblind” Video
Next Hannah Aldridge at the Stage at KDHX in St. Louis, MO on 1.22.16