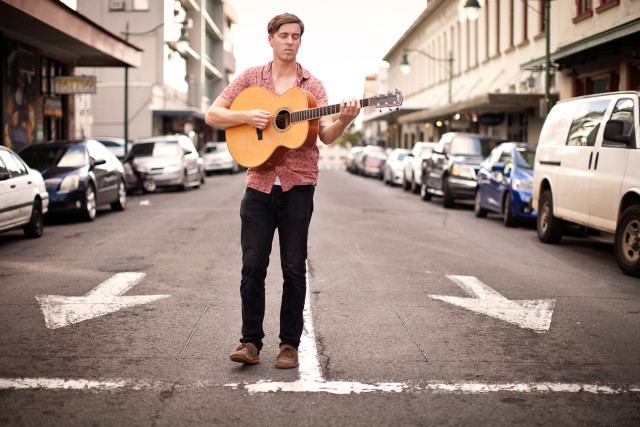 Now he regularly performs at many of NYC’s most respected listening rooms. Lind’s expansive musical journey presents some fascinating geographic storylines. A native of South Jersey (near Philly) who became a driving force on the NYC music scene, Lind has performed regularly in California and recently relocated to his dad’s native Hawaii.

In between studies at Skidmore College, he lived, worked and gigged often in Honolulu.

Expanding his repertoire, he studied with renowned artist Ozzie Kotani. After graduating with a Bachelor’s in Music, he moved to NYC and within a year began gigging at hotspots like Rockwood Music Hall (ultimately performing on all three stages), The Living Room and Pete’s Candy Store (where he secured various residencies). This is a transition into a more pop style of music for Chris Lind, on his latest single “Drive.”

Chris Lind is an artist you can’t say anything bad about, yet anyway. As much as one tries to flaw this lead-off single from his new EP, it just can’t be done. This is a quality piece that won’t quite. If at first it comes off a little on the bubble gum side for such a complex artist if you listen to other stuff he’s done. This takes him into more of a pop-structured atmosphere and it works wonders. Folk and traditional acoustic stylings really mesh with pop here very well, and that’s not always easy to do. Sometimes you get Euro-pop heavy sounds, rather than this Americana feel that actually does the business.

In a nutshell it’s pretty easy to know what a title like “Drive” can be about. But this is no ordinary drive, it’s particularly focused on what really seems like an experience he’s actually had. It comes off that real anyway. I hear the Slack Key player in him and it’s a unique part of the sound but not overly featured. And his voice is mesmerizing throughout the whole track. You pick up pretty fast on what’s going on and from there you can’t lose an ear to it.

Things go from a very light touch to an almost incendiary amount of energy that contrasts so well together. But when you first listen to it, you almost get the instant feeling it’s not going to pick up. That is one testament to the whole thing because you wind up welcoming the tempo changes. Once again that is not always a welcomed approach.
A lot of that is pretty well gotten across in the lyrics to back it. I also really like the atmospheric feel in parts, as well. It has more than one mood and that helps it bring high marks.

The “Drive” itself seems to go west to get away from the speed of the east and kick back as the western settlers have always done compared to the energy level to be found on the east coast. It seems to turn out that way anyway. But over analyzing can also ruin the whole idea of listening to a song, so it finds that middle ground as well, but he tells his story clearly nevertheless. I think this could be a hit for anyone, as there is a lot put into this track which keeps accessible values but also eludes commercial aspects at the same time. No cheese for this weight of music.

If Lind keeps this up he could find himself charting high and staying there. But there’s a lot more to a music career these days than topping or even making the charts. However, it’s usually any musical career ambition to try, and this is right down that alley, but can still live without it if you ask me. What matters most is that he’s getting around and playing, so anything that comes with it is a bonus. I’d like to see this succeed on every level it can. It’s a great tune with a solid message, and he’s a fine artist on his way to hopefully bigger and better things.

It comes recommended, as does Chris Lind himself. You get production values that equally match his songwriting skills, and that is yet another point of sale for this great song, which as you can see there are many.