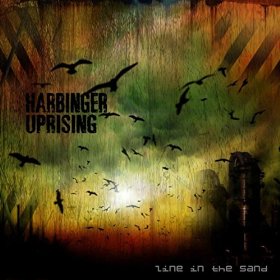 Harbinger Uprising – Line in the Sand

Harbinger Uprising – Line in the Sand

The album Line in the Sand from Harbinger Uprising may not be a necessary godsend when it comes to the metal heads of the universe. However, Harbinger Uprising are a much more needed ingredient when it comes to digging deep into today’s metal genre. Now I don’t want to exclusively settle Line in the Sand as a sole contributor to the rock nation. Yet easily as the album plays out, the band brings out a Linkin Park type of mash up with their track Undone. That is without falling to fault once Linkin Park switched to a more electronic based sound. Within Harbinger Uprising, balance is not only key but without taking each track too far over the edge, Morgan Adames (vocals/guitarist) transitions between full on freak-out and back to his calm, cool and collected self.

With Dive coming in as the 6th track, this one song alone takes home a triumph award for being a composed half instrumental song while adding in lyrics where they not only seem to fit snug; yet a sense of control is clearly uttered through Adames story-telling.

So Much More unravels as pre-record conversations play beneath the underlying track, they almost sound like announcements as this song inches forward as a more progressive punk take. Giving a full bodied song, even more depth as layers start to form and heighten the quality until you eventually have to turn the volume down. I’ll call this track the noise generator for all intensive purposes.

Then, then Only A Second Ago comes off as this deeply ritualistic instrumental six minute song that hurts a little too much (in a good way). If you are a fan of insanely, long guitar solos that switch off between clean, reverb, fuzz and drive…by all means dive into the abyss with this one. Because there is no way that this song will go unnoticed. The same goes for lucky number 13 Eye on the Prize.

Maybe only nitpicking music fanatics can pick out which musicians have taken from other songs that graced the Top 100 Billboard; however with Line in the Sand it is with a gracious admiration that hearing those influences brings a misty tear to my eye. Because out of all of the horrible reused riffs and catchy guitar licks that we hear in Pop music…being able to assertively say that Harbinger Uprising have certainly raised the bar. Surely they will start to receive recognition soon enough or at least that is the promised hope we all share.

What pushes Harbinger Uprising towards the front? A destined desire to merge numerous bands/solo musicians and genres to fully capture the heightened capacity that Rock music has gifted all of us for years. Whether that music came in the form of Grunge, Rock styled Rap, Alternative or basic Rock chords; nothing compares once a band has fully grasp that one thought “What happens if we take each and every aspect from the last 20 years and combined it all”?

Well this band from Tennessee may be one of the only hardcore groups to try and reach further than their previous influences. Plus how long has it been since a band has knocked out a 19 song album and succeeded with literally… every track? In recent memory, no one.