Home / Interview / The Power of Music on Alzheimer’s – An Interview with MUSIC & MEMORY℠ Founder and Executive Director, Dan Cohen. 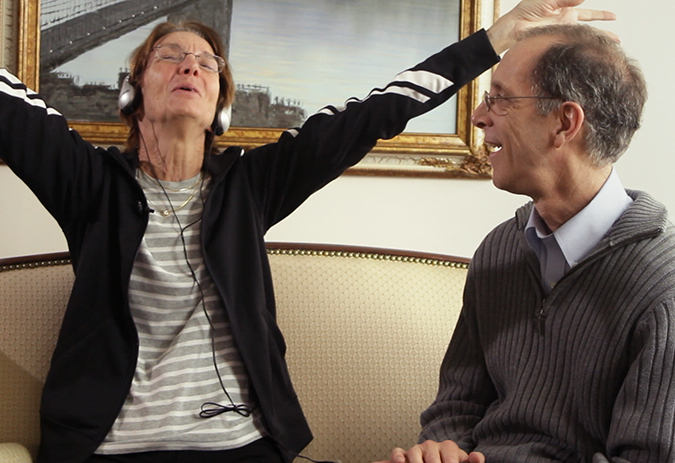 The Power of Music on Alzheimer’s – An Interview with MUSIC & MEMORY℠ Founder and Executive Director, Dan Cohen.

Music has proven to be an incredible tool against the degenerative effects of Alzheimer’s, a fact that Dan Cohen, founder of the non-profit organization MUSIC & MEMORY℠, knows all too well. “When it comes to something like Alzheimer’s Disease or other forms of dementia, there’s very little hope,” Dan told Music Existence. “Patients with advanced dementia can’t even recognize their own family members, but when they hear music that holds personal meaning to them, it helps them to reawaken and be more themselves again.”

Since its inception in 2010, Music & Memory has brought tens of thousands of iPods to nursing homes in North America and Europe and has been endorsed by musicians such as Dave Roth, Kenny Chesney, and Paul McCartney. In 2014, Music & Memory brought its story to the Sundance Film Festival with the critically acclaimed documentary Alive Inside: The Story of Music & Memory, which went on to receive many awards.

Despite the organization’s achievements, however, there are still far too many people living with Alzheimer’s who can’t access their own music, and that’s why Music & Memory needs your help. In this interview, Dan spoke with Music Existence about the effects of music on our brains, why those playlists you create are so important, and what we can do to help bring music to those who need it.

ME: Music & Memory has grown into a multinational movement since its inception in 2010. What was it about this particular issue that resonated with you and led to the creation of the organization?

DAN: In 2006, I heard a journalist on the radio talking about how iPods are ubiquitous. I thought, well, kids have them and a lot of us older adults do, too, but for people living in nursing homes, it just doesn’t seem very likely that they would have access to iPods. I googled “iPods in nursing homes,” and even though there are 16,000 nursing homes in the U.S., I couldn’t find any that had iPods for their residents. I called a nursing home with 600 residents near my home in New York and asked them: “I know music is your number one recreational activity, but can we see if there’s any added value if we were to personalize the music?” They were intrigued, so I came in with my laptop and my iPods. Even though the residents already had live music and general music, we found that people loved just having their own music. I came back as a volunteer every couple of weeks to hone the playlists, got rid of music that was so-so, and identified music that each individual really loved.  People really lit up listening to their favorite music, and that’s what drove me.

When it comes to something like Alzheimer’s Disease or other forms of dementia, there’s very little hope. Alzheimer’s is a terminal diagnosis; there are no drugs that really help, and people kind of give up. Patients with dementia can’t even recognize their own family members, or they struggle to communicate or articulate their feelings. But when they have music that holds personal meaning from their youth, it helps them to awaken and be themselves, be more social, be clearer in terms of functioning and their communicating, which is huge.

Cognition and emotional health improve because we’re using a back door to the brain to access locked away memories. We register our love for music in our emotional system, which remains intact, despite Alzheimer’s. It’s emotion, not cognition. That’s why people with Alzheimer’s still love their music, because it’s tapping parts of the brain that still work well. We are deeply musical beings, and neuroscientists say this is really important because music affects us throughout our lives. We enjoy music from when we were very young

ME: Last year, your documentary, Alive Inside, debuted at the Sundance Film Festival, where it received much praise and critical acclaim. How has the documentary affected Music & Memory’s mission since the screening?

DAN: When I started in 2006 as a volunteer, I would tell people how great this was and they would say, “Oh, how nice, Dan, you’re bringing music to old people.” They didn’t get it. What I was seeing was really extraordinary, and I thought I’m not getting through to people because everyone is an expert on music. Everyone has personal, lifetime experiences with music. I was saying something that was outside of their understanding of music, and I had to somehow show them directly, so I needed to get just a few minutes of this on film. That’s when I found a filmmaker. What he captured with Henry became the most viewed video on Alzheimers/dementia ever at 13 million views.

We released a video of Henry and it went viral in April 2012, when we had 56 homes running Music & Memory. Wisconsin’s Department of Health told us they liked what they saw in the Henry video and asked if we could do this for 1,500 individuals in their nursing homes with dementia. They got the funding to do it, and they tracked results using the University of Wisconsin’s Research Center. It went so well that the state decided to roll it out to another 1,500 individuals with dementia, and now they’re finishing providing all 390 of the state’s nursing homes with our program.

So, yes, the movie is amazingly effective in helping people to connect emotionally with our approach, and it’s very moving. It’s not a sad movie, you know, even though we’re talking about Alzheimer’s. It’s actually a very inspirational movie. It has been a real gift. We knew getting this stuff on film was the only way we could help generate widespread awareness. Even still, we have a long way to go. Only two percent of people in nursing homes have access to their own music; the other 98 percent are often idle and isolated.

ME: Everyone has their own taste in music, so how does Music & Memory make sure elders are receiving the music that they personally connect with?

DAN: This is actually the hardest part. If someone is not able to tell you, and family is either not around or they don’t know, then we have to revert to trial and error – play things and see how people react by sampling music in iTunes or on Pandora. If we can’t figure out someone’s favorite music, the music we give them might not offer any benefits at all, so our goal is to try to get families to set up playlists for their elders now, even if they’re still living at home. They can enjoy their personalized playlists while they’re healthy; should they enter the healthcare system at any point, that music is with them from day one. That’s going to really change their experience for the better.

We spend a lot of time helping to educate and inform professional staff at what we call MUSIC & MEMORY℠ Certified Care Organizations, such as nursing homes and hospices and hospitals, about how to get even better at being a music detective. We teach them how to figure out which songs hold great meaning, what questions to ask participants, and what questions to ask their family members to facilitate remembrance.

ME: In the past, Music & Memory has teamed up with Broadway musician Dave Roth for a NYC iPod drive. Have you worked with other musicians or organizations since to continue these IPod drives?

DAN: Dave does an iPod donation drive every August in honor of his parents who had Alzheimer’s. We are talking to different people in the music industry to get their support. Kenny Chesney did a public service announcement for us; Brian Wilson was helpful with the movie; Paul McCartney has been helping by donating music that he owns, so we are enormously appreciative of any support that we can get from the music industry.

ME: So what can we do to help?

DAN: If anyone has an old iPod, just print a prepaid mailing label from our website, slap it on an envelope, send it in, and we’ll remove your music and send it out to a nursing home. We get about 200 donated iPods a month and are always running out, so we always need more.

When we train staff at non-profit nursing homes, we give them a starter kit that includes five new iPod shuffles. Donations allow us to buy more new iPods. If we had 10,000 iPods today, new or recycled, we would have them all placed in 30 days. It’s because people are waiting; they don’t have their music.

We really count on donations, so we can buy iPods and music to reach more people. We love students to get involved and community members to volunteer. There are so many ways that people can get involved by visiting MusicandMemory.org.

For more information on MUSIC & MEMORY℠ or how to get involved, please visit: