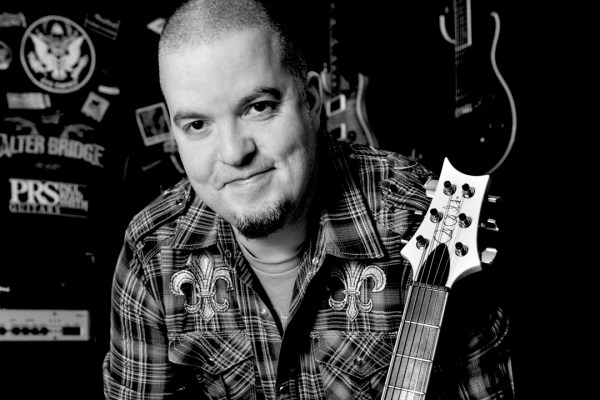 Singer and guitarist Gary Noon recently teamed up with some of his idols Clint Lowery, Morgan Rose, and Brian Marshall on his full length Walking With Giants LP Worlds Unknown. The album is dark sounding but ultimately leaves listeners with positive messages which is just what Noon had in mind. “Instead of succumbing to the constant influence of negativity, you look inside yourself, find a solution you’ve never tried before, and end up in a new place you’ve never been. It’s about finding a different perspective,” Noon explains in the bands press release, and one can definitely tell that Noon has put every inch of positivity he has in him on the record.

Worlds Unknown is bookended with edgy and unsettling instrumentals that tie the LP together, but it is the tracks inside that make up a body of art that Noon should be proud of. “Broken Truth” is electric guitar heavy and is well suited for mainstream rock. Noon’s voice is clear and crisp, but also has some heaviness to it giving the song some depth. “I promise to keep going,” Noon sings over and over on the chorus which is as catchy as it is inspirational. Next up listeners will dive head first into “Back to Life” which has simpler verses in terms of instrumentation but still packs a punch underneath it all. Noons voice really soars here as he sings “I see today and we begin to come back to life.” The chorus is very mainstream and leaves a bit to be desired, but only because it carries a similar message as the previous track. “Bound” has a slightly experimental echoing voice in its verses that brings a welcome shift in the monotony of the album. “Now I’m standing in the ruins of the fortress I’ve lived in for so long,” Noon sings with heartbreak on the chorus but also with a powerful message. Listeners know the game by now. Out of the darkness will come the light.This is something that becomes quite repetitive throughout the LP, but when one is singing with such enthusiasm about battling the dark and coming out on the other side better, how can one really harp on any negative aspects for too long. “The Now” takes the most risks, even if its chorus, which is very rock ballad like, does sound very familiar. It has an energetic and complex electric guitar riff and the verses have an interesting and engaging mellow melody that set it apart from the rest of the tunes on Worlds Uknown, and make it the best track on the album.

The main problem with this LP is what has already been stated before. The rock sound and the message become so similar on most tracks that there is little left for listeners to be pleasantly surprised on. This is not to say that there is anything wrong with that. Noon clearly had a mission of sending positivity into the world and he does so effectively, but one can’t help but wish he had stretched his imagination just a bit more. “Heavy Hand” has some great poetic lyrics such as “what am I the useless?/who are you the judge?” but by the time the song reaches its chorus it begins to bleed into other songs on the LP. And while this definitely makes for a cohesive album, it would be nice to see Noon break out the formula more often.

Still, it’s hard to argue with someone who has so much determination to encourage people to conquer their demons and the demons around them and march on to a brighter future. So while there is nothing groundbreaking to be found on Worlds Unknown, it does a fine job of letting Noon sit in his wheelhouse and deliver what he does best.