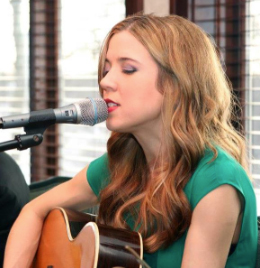 With one listen of Ordinary Things it’s not so easy to figure out where Sarah Morris sows her oats. From the folk of Woody Guthrie to the rocking 80s/90s country of Reba and Mary Chapin Carpenter to legends spanning a breadth from Loretta Lynn and George Jones, it’s pretty difficult to figure out Morris and her road ready band. There’s even southern rock, 50s style hip shaking and tried n’ true radio pop structure on Sarah’s third album making it even tougher to pin down her style. In a world where many musicians employ the copycat method, the dynamic sounds heard here are refreshing.

First up is “Brighter,” a song that’s lit by the sun above in every way. It’s not really indicative of the album as a whole with country guitars beset by folk melodies and vocals, but it works out thanks to its refusal to be anything but what it is. The skyward vocals hit some nice heights whenever they aren’t whispering their positive messages and the dazzling acoustic guitars receive an upward lift thanks to live wire rhythm playing that always adds to the music without taking away from its primary components. These mesmerizing forays into folk continue to entice and invite on later numbers like “You still have me” and “The Strong One.” Each one is different from one another and never bores, especially “You Still Have Me, “as it incorporates a Mexican sounding horn segment that sounds right out of El Dorado itself.

The rest of the album is quite the opposite with its incorporation of blues into heavier rock tones and country influences (as rich in 50s transcendence as they are 90s commercialism). With this type of approach that leaves no style unturned, this set of songs only benefits. “No Memory” and “Sway me” churl out bursts of blues where the sundering rhythms (that upright bass alone!) are just as important as the myriad of guitar sounds (electric, acoustic, steel). When you least expect it they’ll come in with piano for the sizzle and a sly little vocal harmony for the steak, all the while Morris sings her heart out with that picture perfect voice of her. Sometimes the rock n’ roll ideals usurp everything else when “Nice Girl” leaps into a pair of bullet speed acoustic grooves, but more often than not the rock n’ roll teeters on a decisive pace neither too fast or slow (“Lie here tonight,” “Used to be mine” and “Careful, Careful”). Then exactly at that point where you think you’ve figure out the record, the album calls the curtain on “Hope, Sweet Hope,” a choice ballad that tangles mostly with acoustic guitar and melodic sprinkles once it gets going, before turning into a sweeping, lighter-waving rocker that uses splashes of electric guitar for good measure.
Ordinary Things has so many qualities going for it that it never allows its audience to get bored or want to skip tracks. The composition of the songs showcases a singer and band that appeal to that sweet spot in the listener. You can dance like a wild child to this stuff or let it dim the lights and carry you away on a hypnotic mood. There is a song for everyone here!