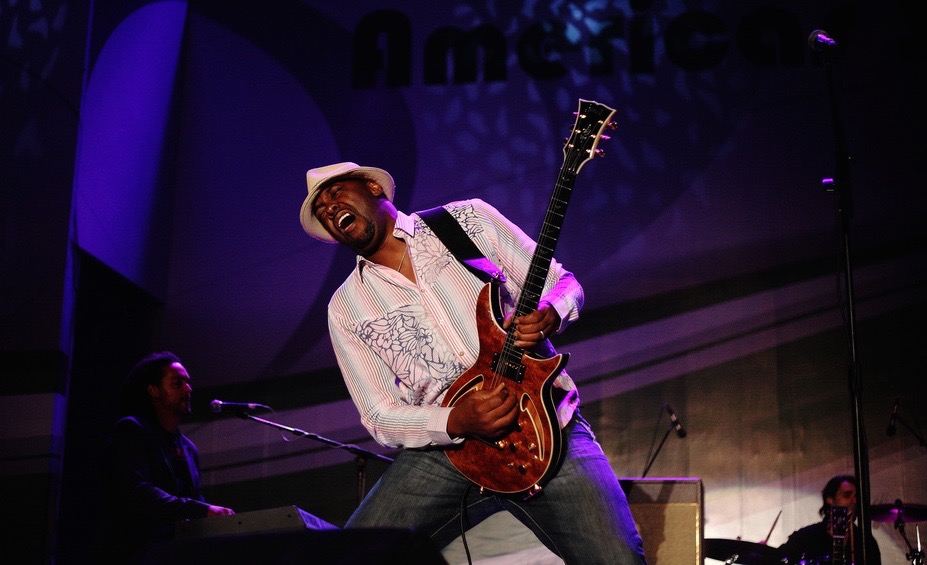 Album Review: Tomas Doncker – The Mess We Made

Tomas Doncker is a traveling singer-songwriter who views the world as a resource for infinite creative expression. Once a regular guitarist in New York’s no wave circuit of the early 80s, the Brooklyn-based bluesman has since collaborated with a myriad of big-name musicians; among them the legendary Bonnie Raitt, former P-Funk keyboardist Amp Fiddler and Living Colour vocalist Corey Glover. On a global scale, Doncker has toured Japan alongside jazz pianist Masabumi Kikuchi, and made a stellar impression headlining Shanghai’s Folk Festival and World Expo in mainland China. But through his travels, he keeps an open mind, and his insight into the happenings of his native United States remains intact. Proof of this is evident in Doncker’s latest release, The Mess We Made, the cover of which depicts a bleakly hellish dystopia fueled by spiritual loss, race-motivated conflict and urban brutality.

The areas of focus throughout the album directly coincide with the Charleston massacre, a deadly shooting occurring at the Emmanuel African Methodist Episcopal church late last year. Right from the first track, “Some Ol Dolls,” the listener gains insight into the cultural disintegration surrounding organized religion. Doncker intelligently taps into how the inflation of both media and backward conservative views has destroyed what normally suffices spiritual fulfillment. In fact, ‘dolls’ aptly describes the many jaded believers whose means of hearing the Lord’s word has been reduced to mere news feeds. While Doncker’s vocal delivery may come off as nearly gruff and somewhat distant, that is simply part of his effectiveness in conveying this theme. The funky seventh-chord groove that serves as the song’s dominant melody not only left me hooked, but it worked very well in conjunction with the other instruments. At the chorus, there’s an undeniable persistence of determination and hope. Conversely, the second track, “Church is Burning Down,” is newly up-tempo and impassioned. Sporting a pulsing drum and bass arrangement, this carrier single cleverly charges as if it were a roaring fire. It is catchy and soulful, but ultimately observes the irony of churchgoers exhibiting deprecation among one another. Doncker’s vocal abilities are also better utilized here and emit certain nostalgia with defined Holmes Brothers-esque harmonies. “The Revolution”, presumably intended to highlight a path toward social improvement, takes a cynical approach instead. It states that any attempt at unifying a people is thus deemed grandiose as money is their primary drive. Much like the previous song, the lyrical content centers on an evident disconnect between normally close knit friends and family. The album’s title track brings a poignant point into clear view, how the excessive ‘mess’ of social media-based sensationalism depersonalizes communication. From the song’s instrumentation, there is also an undertone of repetition, signifying a newly trudging and aimless community. These components are especially executed well, Doncker rightfully admitting to his self-absorption, as well as his missed opportunity to assist those in need.

Toward the middle of the album, the tone breaks into a bittersweet acoustic setting with “Don’t Let Go”. The track takes its time in that its theme isn’t readily carried out by the title. Rather, the first verse initially highlights an epiphany regarding the death of the American dream. Jobs are still tediously long, roads remain unpaved, and the sense of familial unity has inadvertently dissipated. It is then through this realization—as described in the second verse—that Doncker gets back on his feet to embrace what fulfills him, no matter the degree of momentary disenchantment. For this reason, it would have been more sensible sequence-wise to have the following tracks, “Blood And Concrete” and “Still Haven’t Found What I’m Looking For”—both otherwise solid—placed before this track, as they feel more natural in Doncker’s progression toward a renewed purpose. “Time Will Tell,” the album’s final track, is an effective reminder to utilize faith hand-in-hand with work ethic. Considering the world population’s limited lifespan, it is imperative to be patient, which is separate from simply waiting for a once-in-a-lifetime miracle to occur. The song is stripped of big funk licks in favor of a general alternative sound, which is opportune in easing the album’s pace to a close.

Overall, “The Mess We Made” wittily and intelligently captures a tragedy that will certainly be acknowledged once the mid 2010s are viewed in retrospect. Through the album’s bluesy, funky, and mostly upbeat atmosphere, there’s a teeth-grinding honesty in its portrayal of such circumstances. It’s truly a shame that major label distribution is hard to come by nowadays, as this album has the potential to refresh and ultimately redefine what is played on pop radio.

For more info on Tomas Doncker:

Stream The Mess We Made:

I come from a family who is passionate about all things music. I learned to sing at an early age, and by 13, had my very own Fender Strat guitar. I tried my hardest at learning all that I could. Because I was born with cerebral palsy, I had to teach myself an adaptive playing style. I learned to write and record my own music, despite these difficulties. In college, I started making great use of my writing abilities by reviewing music, as well as copy editing. I guess it's best to stick with what you know, while welcoming a fair challenge at the same time.
Previous The Contortionist Announce Headlining Tour Dates with Monuments
Next Album Review: Megadeth – Dystopia