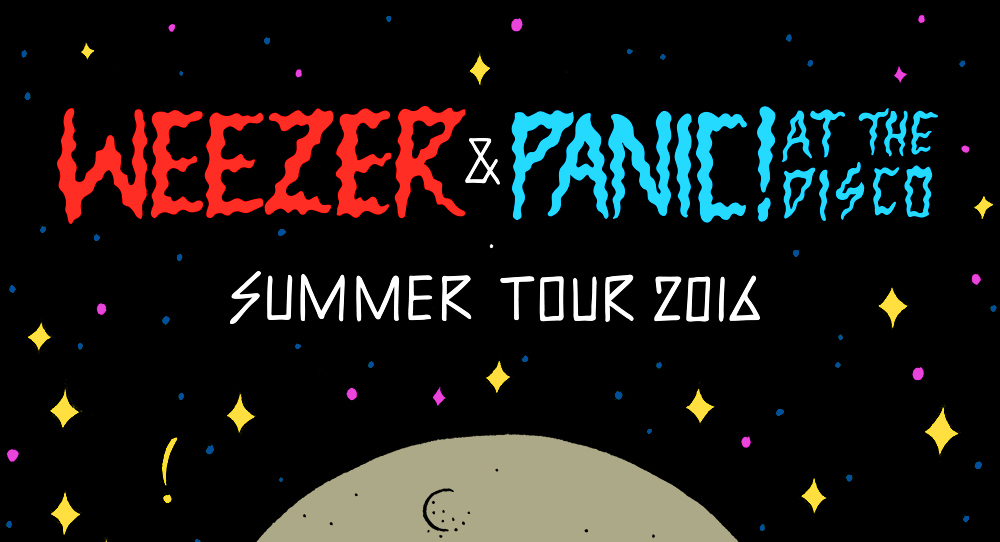 Weezer & Panic! At The Disco to Embark on Massive Summer Tour!

Weezer and Panic! At The Disco announced today their 40+ city co-headlining tour in support of their respective new albums Weezer (self-titled) and Death Of A Bachelor. The summer 2016 tour will kick off on June 10 at the Cynthia Woods Mitchell Pavilion before continuing through major markets like Miami, Dallas, Boston and Chicago before concluding in Irvine, CA’s Irvine Meadows Amphitheater on Aug. 6. Indie-alternative artist Andrew McMahon In The Wilderness will be featured as a special guest on the tour. Tickets On Sale Beginning Jan. 22 via Weezer.com and PanicAtTheDisco.com.

General on-sale tickets will be available on Jan 22. at 10AM local time. For more information on the tour and to purchase tickets visit: panicatthedisco.com/tour & weezer.com/tour

Today also marks the unexpected announcement of Weezer’s self-titled, tenth studio album (referred to as The White Album) which will be released on Apr. 1 via Weezer/Crush Music. Produced by the band and Jake Sinclair, The White Album follows 2014’s critically praised Everything Will Be Alright In The End, and continues that record’s celebrated return to musical form.  The first new song available from The White Album (which also features last year’s awesome “Do You Wanna Get High?” and current fast-approaching Top Ten Alternative Radio single “Thank God For Girls”) is a sun-bleached sing-along called “King Of The World.”  On this tour, fans can expect lots of new material from The White Album, as well as the much-loved anthems for which Weezer are known like “Buddy Holly,” “Beverly Hills,” “Pork and Beans,” and more.

Death Of A Bachelor is Panic! At The Disco’s fifth studio album that was released today on Fueled By Ramen/DCD2 Records. The record’s first single, “Hallelujah,” has since accumulated more than 20 million streams on Spotify and over 11 million plays on YouTube while the current single, “Victorious,” launched at No. 1 overall on iTunes, iTunes Alternative Songs, and on Billboard + Twitter’s Trending 140 charts just hours after its release while also accumulating over 24 million plays. Musically, the album is a powerhouse full of boisterous anthems with huge choruses, slick production, and compelling samples. In frontman Brendon Urie’s words, the album sounds like Frank Sinatra taught DJs to write rock ‘n roll. The new record is the follow up album to Too Weird To Live, Too Rare To Die! which made a top 2 debut on the SoundScan/Billboard 200 upon its 2013 release. Currently, the band is celebrating the 10-year anniversary of their debut double-platinum album, A Fever You Can’t Sweat Out.

Andrew McMahon In The Wilderness’ eponymous album has produced the smash single, “Cecilia and the Satellite,” garnering over 12 million Spotify plays and has become a Top 5 hit across both Alternative and AAA radio, Top 10 hit at Hot AC and climbing at Pop.  “Cecilia and the Satellite” has found great commercial success having been featured on MTV’s “Real World,” the TV promo for Warner Bros. Pictures’ film PAN, and has performed the single on “CONAN” and on “TODAY.” Aside from his professional successes, McMahon is a survivor of leukemia and founder of the Dear Jack Foundation which advocates for and supports initiatives that benefit young adults diagnosed with cancer.