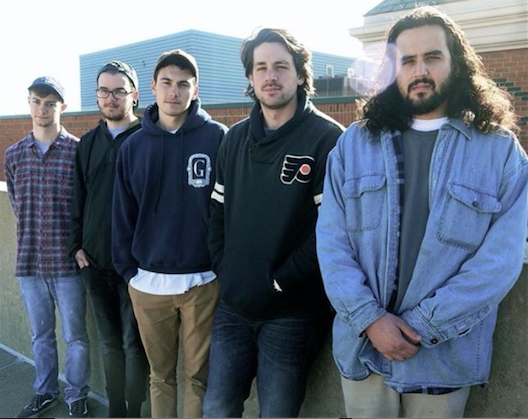 Philly alt-rock/pop-punk band Grayscale has partnered with AltPress.com to premiere a video for their brand new song “Palette.” The track is featured on the band’s upcoming record, What We’re Missing, which will be released on February 12th via Anchor Eighty Four Records. The album is now available for pre-order at http://www.anchoreightyfour.com.

““Palette” is about feeling shut out or left behind from a relationship,” says vocalist Collin Walsh. “As the song progresses, the lyrics turn into a “realization” that the ending of the relationship was for the better. There are silver linings in everything, it just takes some time for them to surface.”

Blending pure, raw emotion with elements of alternative rock and punk roots, Grayscale has spent the past four years crafting their own unique loud and catchy sound. Delving into their deepest personal thoughts and experiences, lyricists Walsh and Dallas Molster call it as they see it, no matter how brutally honest. The band’s bouncy rhythms and memorable hooks will stick in your head on first listen, and their relatable lyrics and stories will have you singing and screaming along in no time.

Emerging quickly from the thriving Philadelphia punk scene, Grayscale has been at it since late 2011 building a strong reputation and gaining steam among fans and music lovers. Coming off of their successful Change EP release in April 2015, the band is now ready to unveil its latest and most complete collection of songs to date in their Anchor Eighty Four Records full-length debut, What We’re Missing.

“What We’re Missing is a collection of our thoughts, feelings, and stories from the past two years,” explains drummer Nick Veno. “It’s a very personal record for all of us. It’s brutally honest and revealing of certain happenings in our lives ­ both happy and sad. Collin and Dallas are never afraid to call things as they see them, lyrically, and that kind of bluntness certainly didn’t change for this record. We held nothing back. We put everything that we had into these songs, leaving us completely unveiled and vulnerable, but in a way that was therapeutic. It allowed us to release the thoughts and feelings that were weighing us down, and tell each individual story from our perspective. We revealed our deepest emotion on this record, and I think people will take notice of that.”

Produced by Gary Cioffi (Transit, Misser, A Will Away) and mastered by Grammy Award winning engineer Brian Gardner (The Story So Far, Teagan & Sara, Kendrick Lamar) and featuring artwork by Daniel Fishel, What We’re Missing is sizing up to be an incredible release with stronger hooks, more intricate instrumentation and well-narrated stories. Grayscale is comprised of Walsh, Molster, Veno, Andrew Kyne, and Derek Parker.