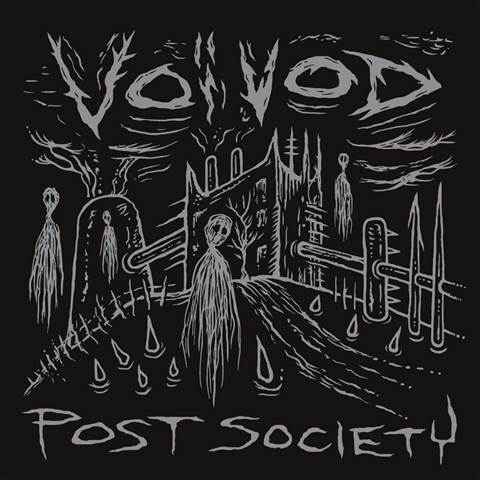 Canadian progressive sci-fi metal innovators VOIVOD, who recently toured Europe as part of the Deathcrusher 2015 Tour alongside Carcass, Obituary and Napalm Death, are pleased to announce the release of Post Society EP Mini-CD. This special release will be available in Digipak CD format as well as digital download on February 26th, 2016 via Century Media Records.

The Post Society EP, with artwork by VOIVOD drummer Michel “Away” Langevin, contains 5 studio tracks, including the previously vinyl-only new VOIVOD songs from the split 7″ EP’s with label-mates At The Gates and Napalm Death, two brand new songs and a Hawkwind cover (“Silver Machine”) total playing time of 30 minutes. Here is the track-listing:

Michel “Away” Langevin checked in to comment on the release as follows: “More songs from out in the woods! In between tours, we are steadily finding our way through recording the next album at RadicArt studio. Many riffs were composed on the bus but until the North American tour with Vektor in 2016, we will spend most of wintertime in Montreal writing another batch of material. Meanwhile, we hope you will enjoy this EP of good old thrash-prog-punk-metal or whatever people want to call Voïvod nowadays :)”

VOIVOD’s previously announced first leg of their next US tour in February/March 2016 with support by Vektor, as well as Eight Bells from February 6th – 287h and Black Fast from February 28th – March 5th, has recently been expanded for a few dates. Here is the updated schedule (Recent changes marked *):

For the recent Deathcrusher tour, VOIVOD released a Split 7″ EP with label-mates Napalm Death with the track “Forever Mountain” as well as Napalm Death’s exclusive track “Phonetics For The Stupefied”. This special vinyl-only release, which followed up VOIVOD’s Split 7″ EP of the song “We Are Connected” with At The Gates from earlier in the year, is limited to 2.500 copies (Black: 1200x, Solid White: 300x, Transparent Red: 700x and Neon Yellow: 300x) is selling out quickly, so check for the last available copies here.

Get VOIVOD’s latest releases from CM Distro in Europe here.