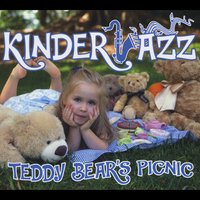 An album meant for kids is a bit hard for an adult to review. Obviously a grown up won’t hear it with the same ears and insights a child will. Still, I’m going to give it my best effort.

The opener bears the title “Arabella,” and I love the reggae vibe on the piece. With the horns it almost feels like Madness to me at times. There are definitely sections that are closer to pure jazz. There was a trend a while back that saw a return to the big band era. The sounds of that period had a harder edge. The title track isn’t really part of that, because it’s very much faithful to the music of the 1920s and 30s instead of having the modern edge.

I would have to mention Madness again on “In the Micro Aykho.” Somehow the song makes me think of them again just a bit. I wouldn’t say that it is my favorite piece here, but it’s entertaining for sure. I don’t know what I think of “Razzmatazz.” It’s pretty strange. It has a lot of musical theater build into it. There is a British thing called “pantomime.” As an American, I only know about this from reading about it. I have a hunch that it’s a lot like this.

More along the lines of some of the jazzier stuff from the 1980s in some ways, “Do the Latin Alphabet” still has a lot of retro swing built into it. Sure, it’s for kids, but you will probably wind up enjoying this one, too. And, the moral for today is “get your homework out of the way, then you can play.” It’s even the last part of the song “Homework Blues.” Who knew a lesson could be as fun as this jazzy romp.

Somehow “Fantabulous” is one of the more purely fun songs here. I don’t think it’s educational, but it’s a song designed to get kids moving, I think. Somehow “You Can’t Stop the Music” makes me think of the Brian Setzer Big Band. It has that kind of energy and strut to it. This is one that will please both adults and kids.

I love the jazz blowout entitled “What’s Cooking Double Booking?” It’s fast paced and intense. Once we get to the last two tracks, things get weird from the point of view of a reviewer. The first of those, “Potato Salad” has no music at all. It’s just a story. The second is basically a story, too. It’s called “Signals from Space.” It is theatric with various character voices and a little music. It probably lands in the “pantomime” zone, too. I think maybe this would flow better if those last two pieces had been split apart and landed more in the middle of the set.