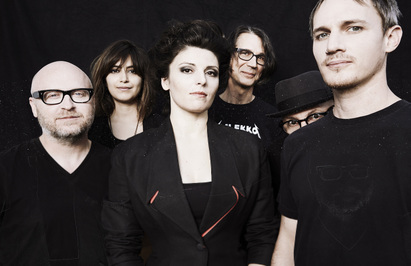 Puscifer today announced a second leg of tour dates “Money $hot – Round 2”, that kick off in March and include a performance at bergenPAC on Tuesday, April 12 at 8:00pm. Puscifer’s creative ringleader, Maynard James Keenan, is best known as vocalist for the exploratory rock bands Tool and A Perfect Circle.

Maynard James Keenan said of the live performance, “This show is so much more than just a band regurgitating songs. This is a multi-media performance unlike anything you’ve ever witnessed. There are those who know, and there are those who will know soon enough.” Guitar player/producer Mat Mitchell added, “Round 1 was a blast for us, looking forward to more bone breaking fun in Round 2!”

Puscifer kicked off the Money $hot – Round 1 tour the day after the 10-song album’s release, playing the Monster Mash Festival on Nov. 1 with the next six weeks spent trekking from coast-to-coast presenting sold out performances that marry the concept of concert and theater. The Kansas City Star, in a live review, said “not much emerges from the music world these days that feels genuinely unique, but Puscifer’s Money Shot tour qualifies. Each component of the show was first-rate: the sound mix, the videos, the musical performance and the theatrics. It all added up to a show that was as memorable as it was unique.”

Money $hot was released on Oct. 30 via Keenan’s Puscifer Entertainment. The album landed at #1 on Billboard’s Independent Music chart, #2 on the Alternative Albums chart and #30 on the Top 200. In a four star review, Revolver Magazine described the album as “a meditative and hypnotic – not to mention wholly engaging – offering” and both Crave and Kerrang placed the release on their year end, best of lists, with Crave saying, “The yin and yang of masculine and feminine energy interweave a pulsing eroticism that curls itself around the mind like one of Keenan’s many grapevines.”