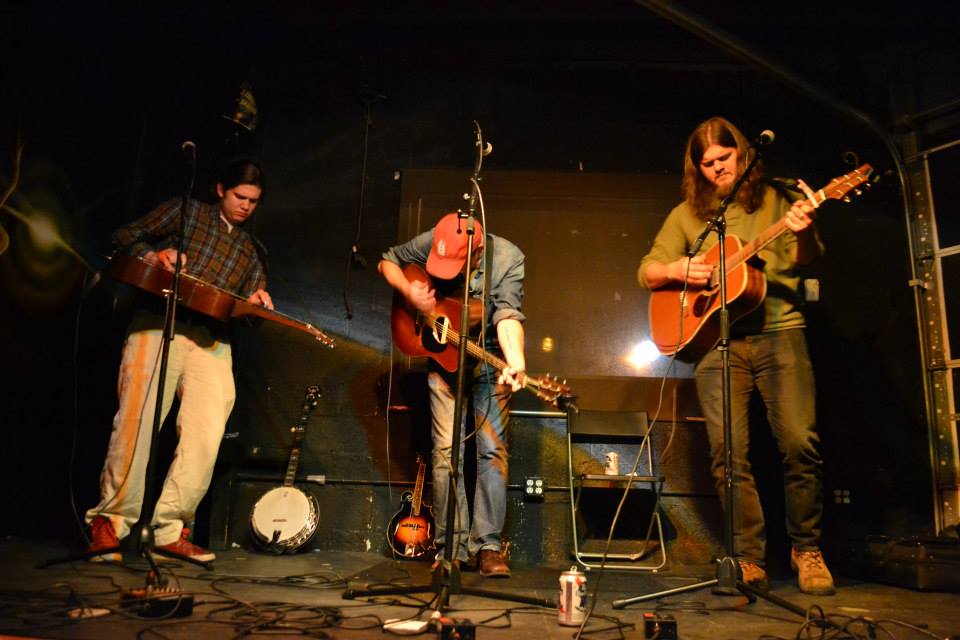 My Politic is an indie/Americana trio hailing from Nashville, Tennessee. It all began back in 2003 when Nick Pankey and
Kaston Guffey met in the small town of Ozark, Missouri and played in several bands before forming My Politic in 2007.
They recorded their first album, “A Few Words I Couldn’t Find Yesterday” in 2008. After playing for years in the Springfield, MO area they decided to move to Boston, MA and try their luck on the East Coast. In 2012, “Could You Come Home” and “Oh My Love” from the Album “Younger Still,” released in 2010, were featured on the Real L Word on the Showtime network. Guffey’s lyrics wrestle with the questions that wear on the heart and the mind with equal intensity, and, in, doing so, provide a personal testimony about his findings. This trio also features Wilson Conroy on banjo, mandolin, dobro and backing vocals.

If Willie Nelsen were an Americana act, it would almost sound like My Politic, but the music goes quite deeper in the lyric department and even some of the guitars, but that isn’t to say Willie can’t play himself. This just reminds me somehow of him, mixed with all that is good in today’s acoustic folk oriented music which has been picking up steam for the last six years or so. These styles all blend well here, let’s put it that way. All of the players sing and play various guitars, making for a good balance of both, if slightly leaning in the guitar area for my taste, but it takes nothing the vocals and songwriting at the same time. It’s worth hearing for yourself, so it comes well recommended, especially for old school country music lovers with an appreciation for new age style folk, as opposed to the old world sort.

The CD is called “Anchor” and kicks off with a track called “Before It’s Too Late.” This is well placed at the beginning and gets the mood factor established right away, as they tend to move that aspect around when it comes to the heartfelt vocals which dictate that a lot. If this is a bad thing they still make up for it, as proven by the end of the opener. It’s a good song but there is so much more to go around it seems to fly by with a more-to-come effect. Not much else to say about it but it gets things going and pumps the listener more, as any self-respecting opener should. It just makes way for more as it goes with the brilliance of “God Vs. Evolution” which deals with quite a headache, making it more or less a hangover song as well as a tongue and cheek sort of theological one. It borders on the depressing but the wit cancels most of that out and you get some humor anyway, which helps save that from taking over, and it winds up one of the best tracks. These lyrics are awesome and all of the vocals swirl together with a pure effortless effect.

For what are mostly or perhaps all acoustic guitars this easier to listen to than most attempts at it I hear lately, and as mentioned they bode well together and pull it off right. “Ways Of Love” almost has a James Taylor vibe to it, going more into an easy-listening or soft rock heavy direction. That’s not to say that it rocks, but it does hold those values well. It’s just very mellow and satisfying that way. “Heartless” is even better as it gets a little away from that and back to a higher place, as it’s certainly a better song with some fabulous string-play. I love how this starts and ends, and all that comes with it. Good stuff that does seem to climb as it goes track to track.

“Nobody To Blame” has a strong narrative feel with some heavy drug addiction in the lyrics, with some excellent dobro playing for a swampy feel behind the extremely depressing lyrics that can’t be ignored, with an almost Neil Young lyrical influence. It’s a good track but things come back into a more pop edge on “The Truth” which also influence felt, reminding me of American Pie by Don McClean, but the guitars even take it to a Mr. Bojangles direction. These are just observations concerning what the vocals remind me of. I doubt if they are intended, but it is worth a mention that they have these qualities for me. Perhaps the influences are there, perhaps not, but it’s a compliment to the band anyway, if I can add that without knowing it for a fact.

“Ain’t No Saint” is more of a guitar heavy track with a lighter vocal in most places but it does occasionally pick up. I’d have to call it one of the less impressive vocals but the lyrics once again save this one. I just can’t get into it as much as the others, but the content loses nothing because of that, so it comes out just a little weak, which he sings about feeling as well, so it checks out just the same. Truth needs time, and that’s the overall point of this track as the CD winds down. It’s still somehow enjoyable to its credit, so worth mentioning.

Some more talk of drugs and alcohol on “Anchor” which serves to sink anyone, so it wastes no time in the subject matter on the last track. It maintains the interest in the lyrics especially, with a comprehensive message not to let the elements drag you down to the bottom of the water. The guitars blend together on this one as good as anywhere else, making it another winner for me, as I like a good advice song as much as the next. These are all well written and recorded tracks with maybe one or two hanging lower than the rest, but an overall satisfying release by a band worth keeping an open ear to.

Wilber Leon is a singer/songwriter and rapper based in Seattle, Washington. Having marked the late …