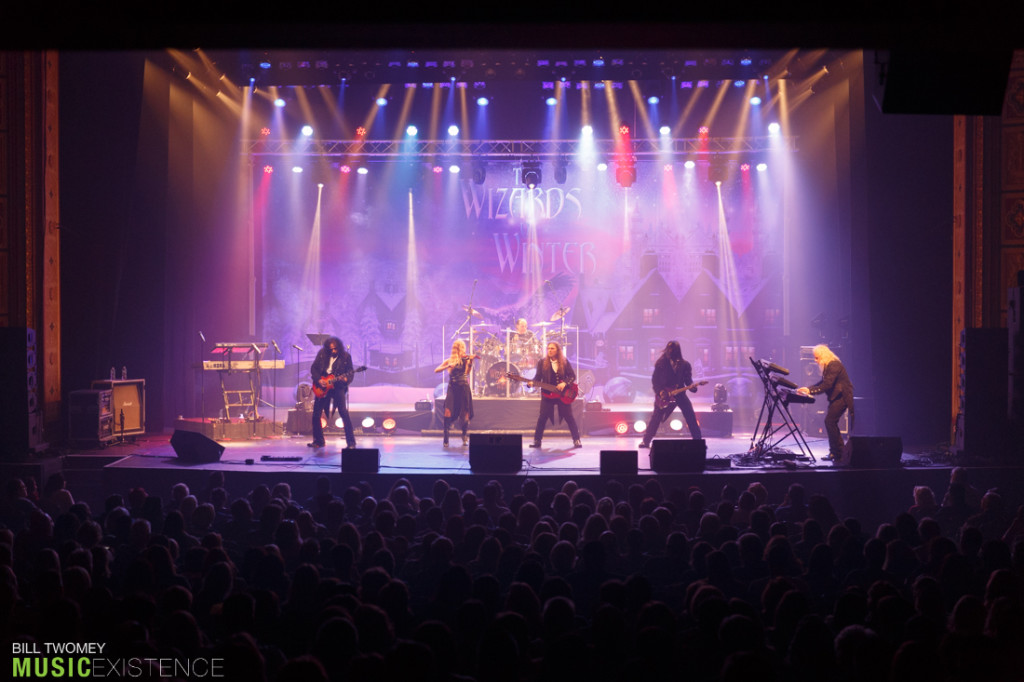 Gallery & Review: The Wizards of Winter at The Count Basie Theater

This past Saturday, The Wizards of Winter brought the Christmas spirit to the state of New Jersey. The Wizards of Winter are a unique group of musicians, featuring original members of Trans-Siberian Orchestra. The band originally formed in 2009, as a way to give back to their home town community. The local food pantry was going through difficult times. In response to the local food pantry going through difficult times, band leader Scott Kelly was looking to hold a holiday concert in honor of the cause. Scott approached his wife Sharon Kelly (Lead Vocal / Flutist) and Steve Ratchen (Bassist). With the three of them working together, they reached out to other musicians and created a team of stellar musicians. What started out as a tribute project, became a full-fledged holiday band, which has been touring yearly since.

The Wizards of Winter wasted no time taking the crowd on a magical journey, through a two plus hour set filled with fascinating music. The magical journey was lead by narrator Tony Gaynor. One of the first songs they played happened to be Flight of the Snow Angels, off their new album The Magic of Winter. I was instantly hooked to what I was hearing. Between hearing the amazing flute work of Sharon Kelly and watching the guitar dueling of Fred Gorhau & T.W.Durfy, I found myself enjoying what happened to be a music lover’s dream. Before I knew it, the first half of the show was over.

Scott Kelly came back out on stage and the second half of the show was about to begin. Before it began, Scott gave a warm hearted shout out to all the men and women of the United States military. He explained that the song they were about to play, March of the Metal Soldiers, was made for the military. Scott also mentioned that the band would be giving away free copies of its newest album The Magic of Winter to anyone who went to the merchandise table and showed their military ID. I found this to be mindblowing, as we don’t see fellow Americans honoring the military as often as they should. As if watching them perform live wasn’t amazing enough, this put the icing on the cake.

The Wizards of Winter also puts on an incredibly fun show. They played a song titled Toys will be Toys, where members of the band threw beach balls into crowd. For a slight moment, I forgot that I was at a Christmas themed concert and felt like I was at a concert in the midst of summer. The crowd absolutely loved and had a blast hitting beach balls all around the Count Basie.

Not only do The Wizards of Winter put on a fantastic Christmas show, they know how to play rock n’ roll too. I was surprised to hear them play a cover of Joe Cocker’s Little Help, which was led by Vinny Jiovino vocals.. This wasn’t just any normal cover of Joe Cocker, by the way. I also heard several rock medleys, which I really enjoyed. I could sworn I heard a little Roadhouse Blues jam in there too. I talked about both of the guitarists in The Wizards of Winter – Fred Gorhau & T.W. Durfy. I’ve seen some amazing guitarists in live before, ranging from Steve Vai to Joe Bonamassa to Glenn Tipton. Both Fred Gorhau & T.W. Durfy are right up there and some of the finest players I’ve seen live. These guys are the best of the best…..and did I mention Fred is New Jersey native who does guitar lessons on the side? Check him out!

In the end, if you’re lucky enough to be near a The Wizards of Winter tour stop this year, check them out. Consider yourself lucky if you get to see them. Their tour consists of mostly east coast dates, with the tour finishing up in Harrisburg, PA on December 29th. Once you see them, you’ll agree that they are one of the best holiday themed bands on the road today. From the snow falling inside the venue, to band members singing in the audience, and outstanding musicianship…. it’s fun for the whole family.

For more information on The Wizards of Winter:

Resident Music and Photography addict from Northern, New Jersey.. USA. Got into both music and photography at a young age.. it's been history since!
@billtnj
Previous Album Review: Coldplay – A Head Full Of Dreams
Next Sex, Drugs, and Lipstick Stains