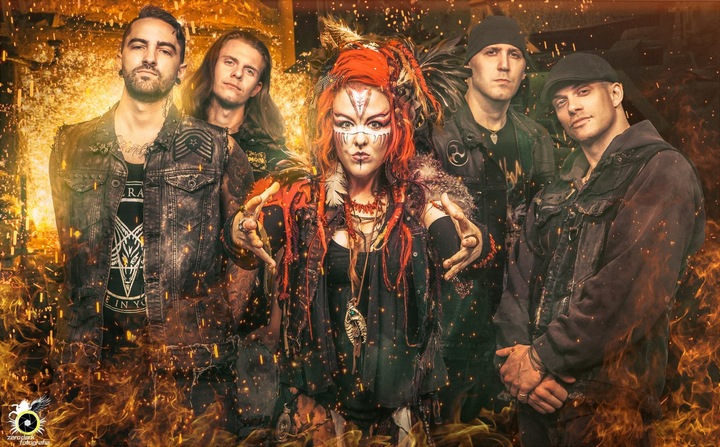 It is impossible to pigeonhole MEKA NISM into a specific genre. The band inhibits no particular style but its own, manifesting itself as an artistic, elaborate, and eclectic sonic barrage. Named one of Orlando Weekly’s “Best Metal Bands in Orlando” for the past three years in a row, MEKA NISM features enigmatic lead vocalist Meka, former guitar player for Orlando punk legends Dirty Barby and Angel Autopsy.

MEKA NISM will join platinum rockers TRAPT on their upcoming December 2015 U.S. tour this month, beginning December 4th in Little Rock, AR. The tour runs through December 21st when it comes to a close in Springfield, IL.

Meka states, “We are very excited about hitting the road with TRAPT. They are an incredible band and an incredible group of people that we look forward to sharing the stage with for the next three weeks. We see this as an amazing opportunity to get our name out there and show people what we are all about. This is a big step for us and we have been planning on this exact moment for most of year with the release of our EP, The Shift, back in May. We look forward to seeing our fans and meeting all of the new ones along the way!”

See below for all confirmed tour dates.

MEKA NISM formed in 2006, first as Meka Nism and Her Rusty Tears. Meka originally burst onto the scene as the former guitar player for Orlando punk legends Dirty Barby and Angel Autopsy. Florida-based Hidden Records quickly noticed her as being a unique talent signed her to their independent label. In 2006, Mad to Love was the first album recorded by Meka Nism and her Rusty Tears. The album was recognized as an exceptional artistic achievement of great beauty and passion. “Break”, the second track released from the album, was the winner of the Songwriter’s Showcase of America (SSA) Best Experimental Song of the Year award in 2006. In addition, Meka was also named SSA’s Solo Artist of the Month in January 2007.

In 2010, after returning from a massive tour of Japan, Meka was joined by Reed Tyack, Alvin Bauer, and Bobby Keller, all mutual friends, in an effort to grow the immense power that Meka unleashes both sonically and visually. The movement to solidify the group as MEKA NISM began and in March of 2013, the band’s debut EP and very first collaborative effort, The Dance at the End of the World, was released. This EP spawned the band’s first music video for the single “Bring the Sun Back” in October of 2013.

After touring and playing numerous shows in Florida and in the South East, opening for Mastodon at the Kink Festival, and a headlining a House of Blues show, MEKA NISM began writing their most recently released EP, The Shift. The Shift was an appropriate choice of name, as this period saw the shift of Reed Tyack from his position as drummer to guitarist and the acquisition of Jeremy Mansfield as the new drummer. After successfully funding the EP via a Kickstarter campaign in 2014, the band joined Brett Hestla – former bass player for Creed and vocalist for Dark New Day – in the studio to record. The Shift was released on May 1, 2015 with a massive CD release show at the House of Blues in Orlando, Florida.