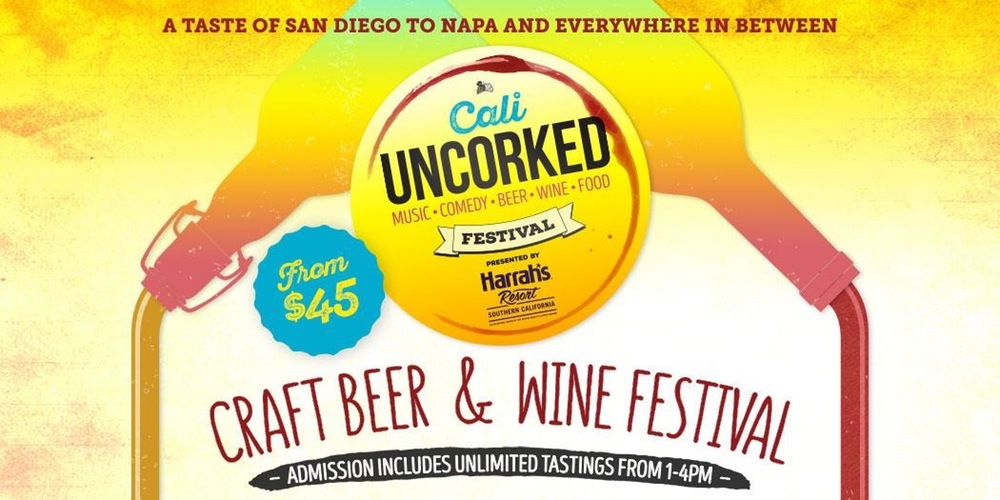 On Saturday, November 14, nearly 7,500 were on hand for the first annual Cali UNCORKED presented by Harrah’s Resort of Southern California, a day-long music, comedy, craft beer, wine and food truck festival at picturesque Oak Canyon Park in the hills of Silverado, CA, just a short drive from downtown Irvine, CA. Here’s a video clip from the festival:

During the festival, Rory Carey of Rebelution told the Orange County Register, “For me and Wes [Finley], playing a show like this is a dream come true.”

“Dr.” Bill Sysak, Craft Beer Ambassador and Certified Cicerone® at Stone Brewing Co. commented, “Cali UNCORKED is unique when it comes to beer and wine festivals. It combines not only great craft beer and artisanal wine but also delicious food, high end cigars, comedians, and live music. As Americans we are all about one stop shopping; now we have it in festival form. What better way to spend a beautiful Saturday than combining all those?”

In her coverage of the festival, writer Kelli Skye Fadroski of the Orange County Register noted, “Guests lined up for unlimited beer and wine tastings starting at 1 p.m. and definitely got their money’s worth as several of the more popular breweries were tapped out by the 4 p.m. cutoff. Between samples, they wandered the sprawling, grassy venue to take in stand-up sets courtesy of a variety of comics curated by the Irvine Improv on the Funny or Die comedy stage. They also turned out for artist signings and caught performances by Tom Curren, Orange County singer-songwriter Matt Costa, reggae artist Collie Buddz and the show headliners, rock-reggae outfit Rebelution…The comics on the bill, including headliner David Koechner, Grant Cotter, Joe Sib, Gene Pompa and Monty Franklin, were also hip to the rising and innovative craft beer and wine culture.” (November 15, 2015)

Chef Greg Daniels of Haven Collective said, “All of us had a blast cooking for the huge crowd, and being a part of Cali UNCORKED! What a great group of people out to enjoy the finer things in life! Until next year!”

“Cali UNCORKED was the busiest event we have ever worked,” said Ashley Wetterstrom of Figueroa Mountain Brewing.

The festival also received heavy support from 91x and KROQ, Funny or Die, and the Irvine Improv.

During Cali UNCORKED, off-duty firefighters poured beer and wine for attendees and a portion of the event proceeds went to the 3631 Fallen Firefighters Foundation.