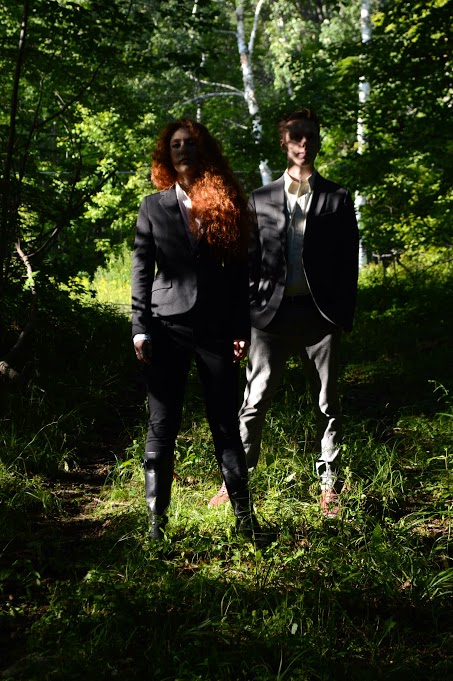 Album Review: Measured in Heads – Revelations from the Gifted (Out December 1)

Last year, a simple exchange of creative input transformed into a bond of avant-garde and conventionality. Once singer O.A.K. added vocals to an instrumental that Mini Zila had intended for a class project, Measured in Heads was born. Based out of Middlebury, Vermont, the duo shares a unified dynamic that is surprisingly lacking in a great many singer/producer collaborations. Their ideas have been culminated into their to-be released debut album, Revelations from the Gifted, an ingenuitive fusion of early Nine Inch Nails with hazy Jamie xx-inspired electro-pop.

Armed with lyrics that cover societal issues such as gun violence, global warming and urban poverty, Measured In Heads set out to expand beyond the typical listening audience. The album’s lyrical pertinence is matched by its raw production values. While dry and minimalistic at the start, they blossom as the album progresses. Accordingly, the band makes a solid effort in showcasing their influences on the opening track, “The Underside”. The haziness and fluctuating synth chords drew me in right away, and are very well executed in bringing out the song’s title as well as its lyrical content. It brings to mind visions of helpless citizens who are unable to find peace even in their own thoughts. What was done especially well was the chorus, which played out as the sonic equivalent of a thriving civilization facing ultimate destruction. Even as its warping melodies increased in pitch, the song as a whole maintained its pacing. “Becoming”, the track to follow, features a light, wispy piano backing to establish the dominant vibe. Its rain-like pre-delay adds an interesting flow to the arrangement, as the notes slide and blend in with one another. When the percussion comes in, the bass line has a lot of breathing room, complementing the vocal melody and the drums at every turn. As the song progresses, the piano melody is more pronounced, allowing each bit of instrumentation their own space and prominence. By the fourth track, “Frontier” the album starts to showcase rockier influences, as well as an interesting single potential. In addition to the slide guitar, O.A.K.’s vocals exhibit a kind of newfound boldness—an expansion of her already flowering soul. Around the 2:15 mark, the rhythm shifts to a danceable up-tempo groove, providing a sense of relief and cheer beyond the darkness.

“Artio” continues the album on a faith-driven note, where pleading for strength in the inevitability of death is the song’s prominent theme. It generally focuses on a better balanced piano/guitar hybrid, making use of scales, light key strikes, and gentle strums. Below this structure is a contrasting bed of jutting, bold drums with various styles of reverberation in play. The second half of the song is the most relaxing, and it eventually builds into a rousing climax, emphasizing the power of faith in its ability to make all evil surrender. This theme is reinforced on “380”, albeit a more in-depth observation of one’s surroundings during chaotic struggle. Toward the latter part of the album, the band’s stylistic presentation reintroduces dry, minimal qualities into the mix, effectively bringing it full circle. “Sinking” has to be my favorite track in this regard, as it contains a distorted, yet melodic guitar with sparing bass drum splashes. It’s almost as if faith and fear had neutralized one another, the ultimate result being neither disheartening, nor uplifting. Some of the instrumentation seems to “pop out” later on at unexpected volume levels. However, I appreciated this type of utilization as a means of the band’s staying true to the roots of industrial music. The final track on offer, “Vignette,” feels appropriate as the album’s closer. O.A.K.’s voice is newly smooth and positive, exhibiting a more soothing and feathery quality. The dispersed percussive patterns that pounce into the song emulate a dystopian planet having been destroyed. All at once, visions of wonders are mashed with anxiety and despair. The synth progression backing the lyrical content is like a TV image continually obscured by static until it no longer exists. And with this annihilation of evil, opportunity arises to build a better world–one that will expand upon open-minded ethics, eliminate fear, and nurture its dwellers in genuine peace.

Overall, Revelations from the Gifted assured me that there can be substance to electronic music, pushing lyrical relevance that extends beyond mere sampled vocals. The album is smart, inventive, and down-to-earth, with a tasteful integration of humor that only enhances the listening experience. Amidst the turmoil that the United States faces day to day, Measured in Heads have a plan and a message to spread that makes this album truly worth the wait.

The band has decided to donate 100 percent of the revenue from Revelations from the Gifted to three charities: the Natural Resources Defense Council, the Robin Hood Foundation, and Everytown for Gun safety. They aim to express their support not only through the content of their music, but by donating directly from its sales. The album is already available to stream on Spotify.

For more info on Measured in Heads:

I come from a family who is passionate about all things music. I learned to sing at an early age, and by 13, had my very own Fender Strat guitar. I tried my hardest at learning all that I could. Because I was born with cerebral palsy, I had to teach myself an adaptive playing style. I learned to write and record my own music, despite these difficulties. In college, I started making great use of my writing abilities by reviewing music, as well as copy editing. I guess it's best to stick with what you know, while welcoming a fair challenge at the same time.
Previous PARADISE LOST launch live video for “Victim Of The Past”
Next Gallery: Kamelot at Starland Ballroom, Sayreville NJ 11.21.15