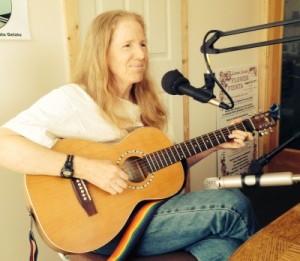 Azaima Anderson is a woman of many facets and impressive achievements. In addition to being an award winning singer-songwriter releasing original material since the nineties, Anderson is also a certified yoga teacher, shamanistic practitioner, and a graduate of both Yale and NYU. Although her music normally focuses on country and folk stylings that have been recognized and praised by famous national organizations such as the CMA, this album titled “Heart Lightning” serves as somewhat of a departure from her typical, more contemporary content and into her interests as an interfaith minister. “Heart Lightning” was released January of last year and features six tracks in tandem with the traditional, spiritual, and religious practices of Sufism, which is essentially an incantation of the Islamic faith.

An impressive aspect of “Heart Lightning” to note is that the lyrics are entirely in Arabic, and Anderson’s pronunciation and delivery of the language is top-notch. Taking into account that many listeners will not be able to understand Arabic, a brief explanation of the lyrical content in each song will be beneficial, and will demonstrate the inherently peaceful, harmonious, and gentle qualities that Anderson wishes to communicate through Sufism as an interfaith spiritual practitioner. The first track, “Bismillah ar Rahman ar Rahim” translates to, “We begin in the name of Allah who is Mercy and Compassion”. This phrase conveys a sense of spiritual unity and oneness and is meant to free oneself from any negative feelings toward others. It is a message of love and mercy through human unification. “Shakur Hamid”, the second track, is essentially a two part song concerning gratitude and thankfulness. Shakur is the representation of tangible, earthly things, such as other people, while Hamid is thankfulness for Divine Qualities, or intangible aspects such as love and harmony. In this way, Shakur Hamid is a song that gives thanks to things that are both tangible and intangible. Track three, “Wedding Gifts”, is based upon an Islamic narrative in which a women named Fatimah, Muhammad’s daughter, asked for a servant as a wedding present, only to be refused and instead taught practices of Islam, which were considered to be invaluable. Zikr is the fourth track on “Heart Lightning”, and is a main principle of Sufism that stresses connection to the Divine and the importance of the aforementioned sense of Oneness. Lyrics throughout this track simply communicate devotion to spiritual oneness, unification, and the presence of the Divine. Rahim Karim is the fifth track, and is a practice of Sufism that was originally intended for children, again a two part phrase (like Shakur Hamid), Rahim means compassion and Karim stands for generosity. The last track on the album is called “Wahhabo Razzaq Fattah”, and is basically the practice of inviting and celebrating all the elements a person needs to have a sense of personal fulfillment and contentment. Wahhabo is blessings and the inspiration of divine qualities, Razzaq is a provider and nurturer, and Fattah is the One who opens the way. In conclusion, listeners will be able to understand that these lyrics ultimately convey a gentle message of love and compassion, focusing on good things and the welcoming nature of spirituality. For more readings and insights into these phrases, visit Azaima’s website http://azaima.com/.

Throughout the six extensive, contemplative, and mesmerizing compositions, Anderson’s vocal presence is soothing and nonabrasive, but also warm and pleasantly encompassing. The vocal harmonies, often in the form of three layer overdubs, are creative, fresh, and will definitively communicate to listeners the calming and eloquent nature of “Heart Lightning”. The overall atmosphere of these songs can be thought of as a collection of gentle eastern lullabys. With its simple, ethnic instrumentation, looping melodies, and gentle lyrical themes of oneness and religious spirituality, “Heart Lightning” is the absolute embodiment of Azaima Anderson’s meditative contemplation and eclectic musical expression. The mix is generally kept very stark and serves as a excellent backdrop for the lyrical messages of these compositions, most songs only include percussion, flutes, and subtle acoustic guitar work. The phrasing and simplistic instrumentation of the album is quite similar to other Arabic music from artists such as Yahya Hawwa, in that Anderson’s vocal delivery and the nature of the compositions seem to have the same gentle attitude of some popular, native Arab musicians.

“Heart Lightning” is an album that is very genre-specific, and will cater to an audience that is somewhat limited. From the standpoint of an average listener, this music would be excellent for unwinding or improving focus, but beyond that, “Heart Lightning” is a very niche work that simply doesn’t have that many mainstream applications. The melodies throughout the compositions are pleasantly simplistic, but might have been embellished for further creative interests and listener enjoyment.

Overall, Azaima Anderson has made an album that serves its purpose very well. “Heart Lightning” is soothing, contemplative, and displays delicate spiritual significance. Taking a departure from her successful work as a folk and country artist demonstrates Anderson’s unique and masterful abilities across a wide range of interests.

Previous Aktaion have “Seven” reasons to check out a new song!
Next DEVILDRIVER Confirm Friday May 13, 2016 Release Date For New Album Trust No One