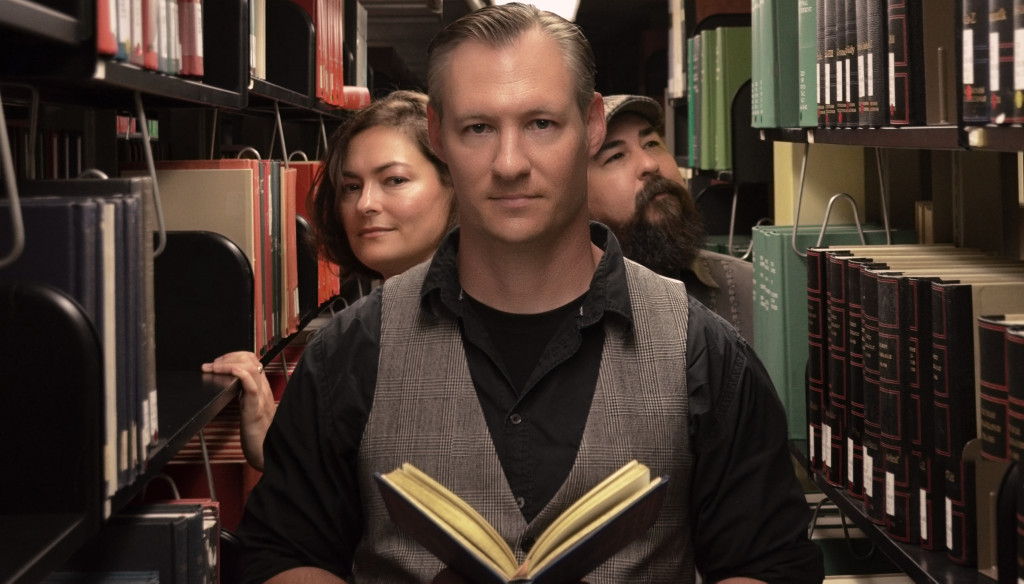 Sci-Fi Romance Premieres Music Video For “If I Fell”

“I came across this odd, beautiful, totally strange 1950s marketing film,” Sci-Fi Romance‘s Vance Kotrla tells Under The Gun Review. “As I watched it, it kept getting weirder and more surreal, but I started seeing how I might be able to craft a new story from what was there.” Which is exactly what the Los Angeles alt-rock/Americana trio did in their latest music video for “If I Fell.” The first single off of their album upcoming album Dust Among The Stars (out January 2016) can be seen below:

Aside from his music endeavors in Sci-Fi Romance, Kotrla is also a published author and cult film critic, which helped inspire the music video. “I love 1950s ephemera, and found footage, and retro-futurism — what people of the past thought the future would look like — and this video was just a lucky opportunity to mix all those things,” Kotrla notes. “Now I can’t hear or play the song without thinking of the video. A happy accident, but I’ll take it.”

“This album was a hard-fought son of a bitch,” says Kotrla, “I’m proud we never gave up on it.” The album features a variety of Kotrla’s influences, showcasing his incredible ability to emote precisely what his feelings were in certain moments of his life. On “Pale Blue Dot”, Kotrla found inspiration in the famous photo of Earth taken by Voyager I before it left the solar system. “It’s the kind of picture that, when you see it, it has the ability to change you.” Kotrla describes. “That’s not such a bad thing to write a song about, if you ask me.” ‘Shakespeare’s Lovers’ features help from the likes of award-winning opera singer, Kristin Vogel. “She’s sung in The Magic Flute, La Boheme, and I Pagliacci and has all these awards… and now she’s on a Sci-Fi Romance record. I’m still kind of amazed,” says Kotrla.

Sci-Fi Romance is an alt-folk/Americana band from Los Angeles, led by singer-songwriter Kotrla. With a lineup of guitar, drums, and cello, the band’s dark, textured sound is evocative of Nick Cave and the Bad Seeds, American Records-era Johnny Cash, and contemporary folk-influenced acts like The Decemberists or Iron & Wine. Their third studio album, Dust Among The Stars, will be released in January 2016.

Previous Interview with Echo Black
Next The English Beat Round Out 2015 With More North American Shows!