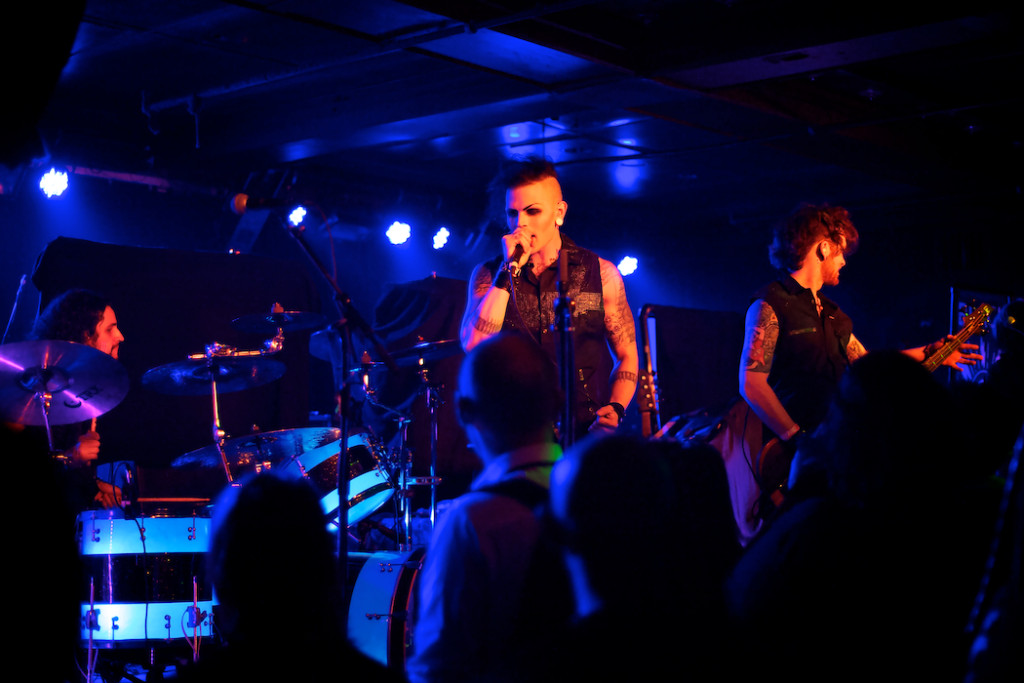 New York’s own Echo Black spent some time with Music Existence after their set in Webster Hall for a fun interview, discussing everything from musical influences, the evolution of their musical style, and the biggest difficulty of being a touring musician. Coming together earlier this year as Echo Black, the band is a self-described medley of rock/pop/industrial music that is made up by Danny Blu on vocals, Billy Long on drums, Felix Skiver on guitar, and Rob Gnarly on bass. The quartet is currently on a North American tour supporting musical acts, MXMS, The Birthday Massacre, and Combichrist.

ME: Who are your influences?

Felix: Whoa! Jumping right into it.

Danny: I grew up with Marilyn Manson, Nine Inch Nails, Lady Gaga. Anything that has a really good beat.

Felix: I’ve always loved eighties glam rock, RATT, Motley Crue, and all that stuff is what I love. Other stuff like X Japan, Foreigner, anything that is really rock and roll I love.

ME: If you had to pick three songs to introduce to someone who hasn’t heard you before, which would they be?

Rob: “Burn” is the standard now but, I would send people “Pleasant Nightmare”.

Felix: I would say “Burn Another Day”, “Pleasant Nightmare”, and “Set Me on Fire”.

Rob: I send “Save Me” to my friends who don’t like heavy music so that they can give a shit about what I’m doing.

Billy: We don’t play the music that we listen to all the time. It’s a mish mash.

ME: How did it feel to work with Davey Suicide on “Burn Another Day”?

Danny: Awesome! Davey Suicide I know he’s is a newer act but he’s a super big inspiration. He just has it down, he knows who he is, he does the look, he sings the songs that have the message. It’s what we want, a unique act that could support the lyrics of the song and the style of the music.

ME: He embodies everything that you stand for?

Danny: Sure. Everything that we were saying in the song.

ME: Who else would you like to work with?

Billy: How much time do you have?

Billy: I hear that Billy Joel is in the Garden a lot.

Felix: I’d like to do a large classical composition with Yoshiki (Hayashi) from X Japan. That big ballad kind of thing.

Rob: I would really like to tour with Fear, and Loathing in Las Vegas from Japan or Eskimo Callboy  from Germany. Those are two bands that I would love to tour with. They’re both fantastic.

Danny: We’d tour with pretty much anybody. Keywords being ‘pretty much’.

Danny: It works different ways, it either starts with the music or with the lyrics depends on the song. I’ve written a hook and send it to Bill, I’ve done that with Felix. Or Felix will have a track and send it to me.

Rob: The easiest way it’s summed up is however the given feeling is at that moment. Be that a guitar part, a vocal part, a piano or synth line. We take something, and we run with it. And it’s not one specific person doing anything. Everyone has some input so the end result is something nice and unique that really pulls from all of our influences.

ME: Do you guys have any before-show rituals?

Rob: We pound it.

Felix: And then we pump fists.

Rob: A great pre show tradition is to run around and find the missing part of gear.

Billy: Remind yourself that you have to hold your pee. I never take a pre show pee, in every performance. I just don’t know why I never remember to go beforehand.

Felix: This is all news to me!

ME: Are there any venues that are you guys hope to one day step foot in?

Rob: All of them.

Felix: Top three are PNC, Madison Square Garden, a personal goal for me is Budokan or the Tokyo Dome. I don’t want to just stay in the US.

Rob: I’d like to say we got to play Antarctica before Fall Out Boy. That’s not gonna happen but it would be funny.

Danny: The O2 in London.

Billy: The Tokyo Dome would be a lot of fun.

ME: Are there any bands that you’d like to open for?

Danny: Bring Me The Horizon

Danny: Let’s do Pink’s next tour.

Billy: Pink if you’re listening to this…

Danny: Pop-electronica acts. They’re in the same scope of what we do.

Danny: That’d be fun. At the Garden.

Rob: I mean we are touring with Combichrist so we can check them off the list.

Danny: Did we say AFI? AFI.

ME: How did you come up with your band’s name?

Rob: There were strangers in that shit.

Danny: We are four people from very different backgrounds bouncing ideas off each other to make the music that we make. Everything is kind of an echo of everything else. We’re all nighttime people, we all create at night. We all live and exist at night, I go to sleep at five, six in the morning and everyone else is on the same page. We’re just night people, we make the sound of night time. I think that’s where the black came from, from that whole situation.

Billy: We also have this big thing to perform for the outcasts, the underdogs. So there was something in that name.

ME: How has your music evolved through the years?

Danny: We were a whole different band for like four years. Different members, different name. We decided to become Echo Black earlier this year, rebrand and put this whole new product out there. Super stoked about tightening everything up and becoming one nice package that we could really hammer our message out, hammer our music home, write together as a four-piece group. The music started at a much more electronic place.

Billy: It started out as more electronic pop oriented project at first. It just kind of evolved.

ME: What has been the biggest challenge you have encountered as a band?

Billy: It’s no bullshit. It’s money. Being a musician is expensive.

Rob: There’s always sacrifice but it always comes down to it being expensive to be a musician. No matter what level you’re at. I saw a meme where they said, “You drive $5,000 worth of equipment fifty miles, to play for ten people.”

Danny: It’s rough. You just gotta buckle down and make it happen.

Felix: You make it happen.

ME: How does it feel to be sharing the stage on this tour with Combichrist?

Felix: The crowds are big and they are such kind people. They’re such cool people to tour with. It’s turning into a big family right now. Doing all this stuff and playing for big crowds, it’s such a good experience for all of us. It’s just a lot of fun.

Danny: We’ve played for nothing, we’ve played to bar staff, we play to parents, like literally nobody. Take Webster Hall, we’ve played downstairs, it’s a basement. We’ve played four or five times over the years. And the crowd is always good, sound is great, small. It’s good, don’t knock it, it’s great to do; but to walk into this huge middle room where we’ve only seen bands play, it’s awesome.

Felix: Then to be told it’s sold out.

Rob: I was super nervous on the first night. It was like ugh this is the largest crowd that I have ever played to. I got up on stage and immediately realized that this is where I fucking belong. The more people the better and now I’ve got this mentality where I would feel weird playing to a small crowd. Because you can really tell who doesn’t like what’s going on. If you play for a large crowd statistically speaking the people in front give enough of a shit it makes it fun and easier.

ME: Lastly, anyone you’d like to acknowledge or shout out?

Billy: Yeah they put up with so much. So much.

Billy: Every music teacher I ever had.

Rob: All of my friends that came out of the woodwork once things started happening and told me that they believed that this would happen for me eventually. That felt amazing, so for every single one of those people that believed in me.

Danny: Our management team who put together this tour.

Billy: Anyone who’s going to go out on a limb and support you in what you’re doing in this. ‘Cause it’s really crazy when you think about it. It’s really a crazy person’s thing. Crazy people it’s what we do. So anyone who can stand behind that and just be like “You’re doing good, keep doing it because you’re gonna be successful”. That takes a different kind of…human.

For more information on this band, check them out at: