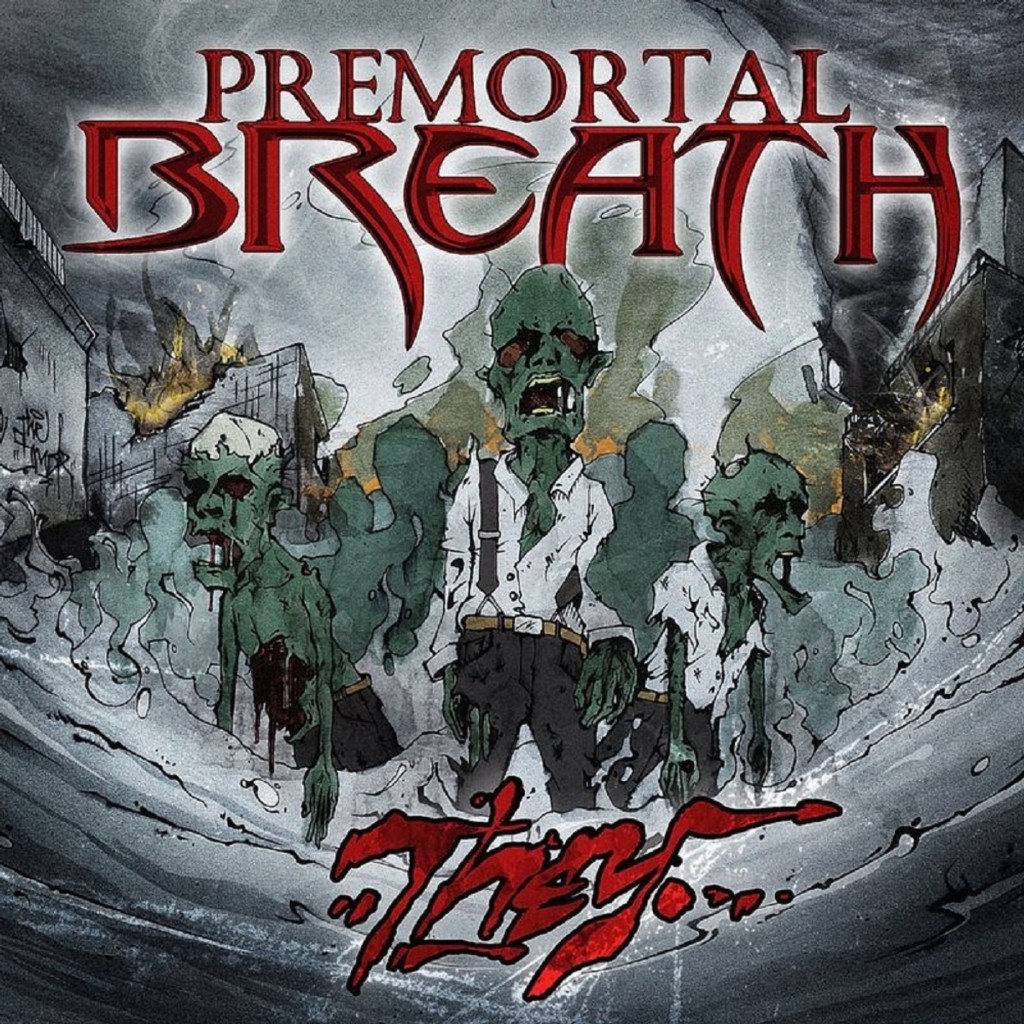 With vinyl, both 180G and regular good old style thickness too, re-appearing in Barnes & Nobles throughout New York City; it is in keeping with the flow of things that I review a hand-delivered 2014 album by Premortal Breath. Okay, it’s not on vinyl — but they sent a CD. The band is from Germany. The production and packaging and sound mix check out. It is fantastic. A 12-panel fold-out shows, at the center, these 5 clean-cut boys fresh out of the office and ready to rock a bit. All of them have suspender-held pants on and white shirts. Two of the guys have their arms folded and vests on. Three are wearing ties. Their expressions on their faces are something I translate as being “very determined”. yet at the same time — they just don’t seem to be hangin’ in the moment. I don’t quite know what to make of them, visually — to be honest. The red and gray motif of both the cover art and the booklet, enclosed, speaks of a workmanlike attitude towards the business of music. Different, is the word that sums it up.

Different is good (often times) in music. Especially a band’s image visually. Even if
it is not that striking. Cheap Trick, on their early album covers, come to mind when it comes to an “office image” being portrayed. I can even mention David Bowie and Rod Stewart.

What about the music, right?: It is heavy. It is melodic. The band is on Facebook and ReverbNation, and Soundcloud. Metal Church and Flotsam and Jetsam fans take heed. Disturbed’s cadences can be heard in the band’s music also.

2. “Into The Light”, though more lyrically suited for a Doom Metal band (Candlemass or Trouble), features a wicked performance by drummer Thomas “Potti” Pettrich. He slams drums and clangs cymbals like there is no tomorrow. Also an inventive

guitar structure weaves itself throughout the song, courtesy of the tag team of Eymer and Herbold.

3. “Fuck My Brain” continues the excellent groove that “Into The Light” ended with. “F.M.P.” is a Megadeth-like romp with bassist “Domme” Eymer coming to the fore. Premortal Breath impress by acting as a unit. They are clearly listening to each other. Thus, the band is quite tight, and I can even appreciate the super growls that define the back-up vocals. They don’t overuse them.

4. “Pain” comes straight out of the gate with a killer guitar riff. The band slow it down a little so as to let the vocals take the spotlight, on this one. The ‘core and punk element in bands as diverse as Warrior Soul or Bring Me The Horizon, crawl out of the ether and coax the listener into paying rapt attention. I like this band. They got attitude and originality. “Give it to me!”… is a simple plea that is imprinting itself on my brain. It’s nice. It is sort of how Metallica gets you to remember vocal refrains.

5. Who are “They”? “They” is the title track of this 40-minute corker of a debut album. Nifty and cocksure, by this fifth song Premortal Breath have a nice solid pace going. The lyrics are to be studied, to glean the meaning and the angle the quintet is coming from. I find myself, admittedly not catching on all too well yet, scratching my head as I search for the true meaning of what Premortal Breath is trying to get across. Maybe the third or fourth time I play the album it will reveal itself to me. “They” is a “grower”, (I’ve decided).

6. “Pleasure” is a slow groover. Nirvana without the crust and must of old Grunge. The guitars are revving it up. If you drive while listening to this one, you might be tempted to speed up a little. Oops, don’t do that!

7. A nice quiet guitar opens “Trapped”. It is great songs like this one that make this album a great buy. The lead guitar is on the money in this tune. This song is my pick for best cut on the album. Again, the band’s ability to move as one (and may I add, behave somewhere left of center), makes me careful to not drop any labels on this band. There is a ton of melody that is sheer invention.

8 “Bloody Baby Shower”. Stop and go guitars lead into an interesting tale. Second best track of the whole affair. A 21st century, King Diamond influence creeps in as a story is told that is hair raising.

A solid effort worth forking the cash over for. Started in 2010, Premortal Breath only have a demo to precede this effort.

In 2010 Tommy (vocals) and Potti (drums) decided to grab the bull by the horns. They wanted to start a fresh-sounding, heavy, yet melodic metal band –the idea of Premortal Breath was born.
Still missing guitarists and a bassist, the two started their quest for fellow musicians. A first line-up was complemented by Armin (guitar) and Tobias (bass) and started working on new songs right away. In October 2010 the bunch entered the Beat-House Studio in Rauenberg/Germany where they recorded two of theirsongs (Mind over matter/Your ruin).

Still lacking a second guitarist Tobias switched from bass to guitar, a wise decision, as shortly after guitarist Armin left the band due to personal issues. Luckily a new bassist was found quite easily in Sebastian. Without intermission they continued to rehearse and push their songwriting, while looking for a second guitarist. Innumerable, fruitless auditions later guitarist David joined the band, being the missing piece. But shortly after the bands line-up changed once again -David left the band to pursue his own musical ideas. The band being fed up with auditions Sebastian stepped up to the challenge and filled in as second guitarist. Recruiting a bassist was kind of a no-brainer, as first applicant Dominik convincedon all levels.

In 2014 we recorded our first album called “THEY” in the “Logischdenker” recording studio that also mixed and mastered the songs. The album includes 8 tracks and was released in July 2014.
So that’s it in a nutshell.

We love to share our music, so catch us on one of our gigs and spread the word!
We had the honor to share the stage with: Alienshake, Angur, Awaiting Dawn, Bastard Nation, Battlemage, Beneath The Grey, BloodFireDeath, Deconstruct, Emerald, Geäst, Hand of Fate, Hatchery, Irony, Ivory Night, Messenger, Metal Roots, Out of Damage, RAW, Rotten Monument, Scathing Irony, Sceptor, SicknD, Tulzscha, Vanderbuyst

Stephen Vicino is the founder of MusicExistence.com. He created this site to give talented musicians a voice and a way to be discovered.
@@svicino
Previous Gallery & Review: Judas Priest at Prudential Center 11.07.2015
Next New Music from American Recording Artist Cameen DELUSIONAL- I’m A Star